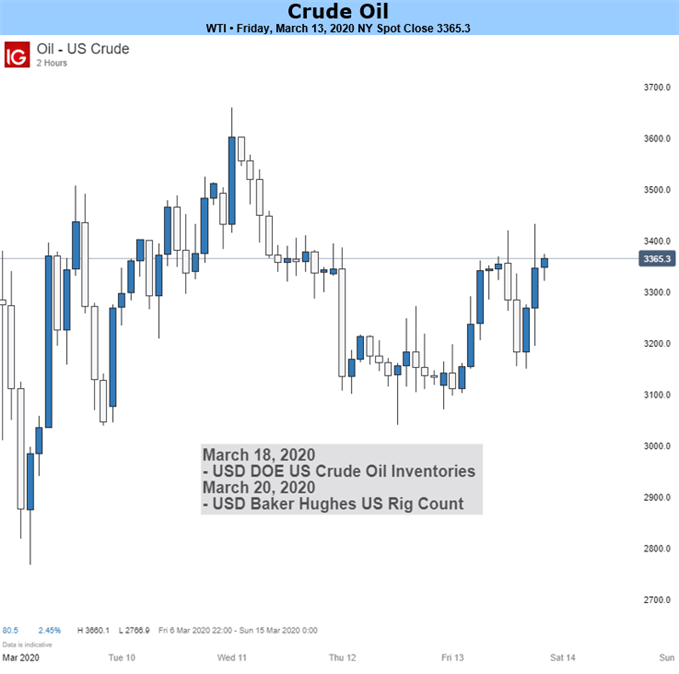 Crude oil prices may face additional selling pressure ahead of the FOMC rate decision where policymakers are expected to cut borrowing costs by 75 basis points. Overnight index swaps are pricing in almost four cuts, with all subsequent meetings reflecting market expectations of aggressive easing. However, like what we saw when the central bank cut rates unexpectedly last week, crude oil prices cratered, and sentiment soured.

The last time the central bank conducted such a maneuver was in 2008 following the collapse of Lehman Brothers. Risk appetite likely imploded shortly after as investors digested the magnitude of what had just occurred. In essence, their panic may have been in response to the Fed’s acknowledgement that prevailing circumstances were so poor that it required an out-of-the ordinary rate cut of such great magnitude.

Crude oil prices fell with equities after the Fed’s easing measures, and investors may seem similar price action at the upcoming meeting. Given the urgency for liquidity and high dovish threshold, there may be more scope for disappointment than relief. Consequently, despite the Fed implementing a $1.5 trillion repo operation almost three-times the size of the US’s annual military budget.

In Vienna on March 6, OPEC and allies – known collectively as “OPEC+” – shook the global stage after Saudi Arabia – the biggest producer in the cartel – failed to reach a consensus with Russia on production cuts. Riyadh stressed the need to constrain supply as a way to boost crude oil prices that were being tormented first by trade wars and slower global growth and now the coronavirus. Russia refused to sign on.

In response, Saudi Arabia said it was going to pump more than 10 million barrels per day and slashed its prices as a way to undercut competitors. Shortly after, officials said they would increase supply to 12.3 million bpd in April. This would constitute a 25 percent increase in supply relative to the prior month and marks a level of output not ever reached before.

In the meantime, smaller scale energy companies with comparatively higher breakeven costs than their major counterparts will likely suffer and drive up default rates in an already-strained energy sector. In conjunction with falling demand, the large-scale production increases may wipe out other competitors and consolidate power in major oil exporters like Saudi Arabia.

As Jim Krane, a fellow at Rice University’s Baker Institute of Public Policy stated “[large-scale increases in oil production] hurt everyone who produces oil. It’s like a bunch of friends holding their breath to see who can hold it the longest”. Consequently, in an environment of deteriorating fundamentals that are also pressuring crude oil prices, investors will see who will gasp for breath and who will stand tall.

Brent’s decline may be amplified by deteriorating growth prospects that have gotten “considerably” worse, to quote ECB President Christine Lagarde. As a key input in the world’s global supply chain, a weaker outlook for economic activity suggests demand for a high-use energy inputs will fall in tandem. The outbreak of covid-19 and its growth-disrupting effects means cycle-sensitive crude oil prices are in store for more pain. 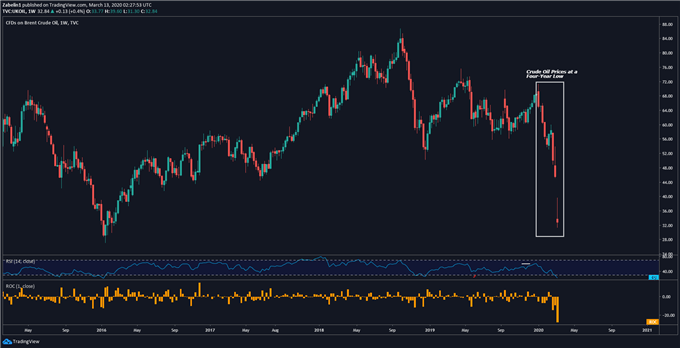 US-IRAN TENSIONS MAY NOT BE ABLE TO BOOST BRENT

While escalated US-Iran tensions over the past two years have typically sent crude oil prices higher from supply-disruption fears, the potency of this dynamic may be ebbing. Last week, US fighter jets reportedly struck Iran-backed Kata’ib Hezbollah locations in Baghdad in retaliation to a rocket attack that killed two US troops and 14 UK soldiers and wounded 14. Crude oi didn’t surge thereafter.

STOCK SELLOFF MAY AMPLIFY RISK AVERSION, DRAG BRENT DOWN WITH IT

Global equity markets have plunged amid the coronavirus outbreak with some down as much as 30% and are trading at multi-year lows and have dragged cycle-sensitive commodities – like crude oil – with them. Consequently, if the stock market selloff bleeds into this upcoming week, soured sentiment will also likely cause investors to turn away from growth-oriented assets like Brent. 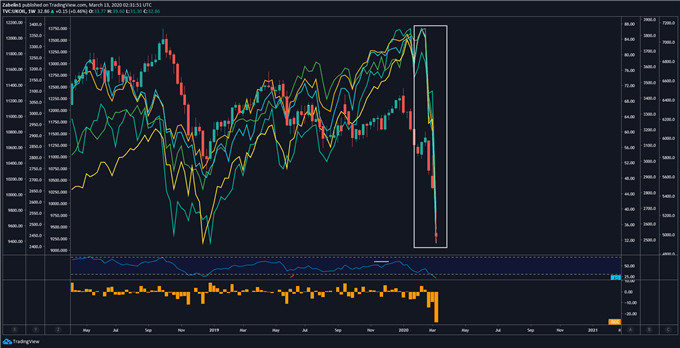