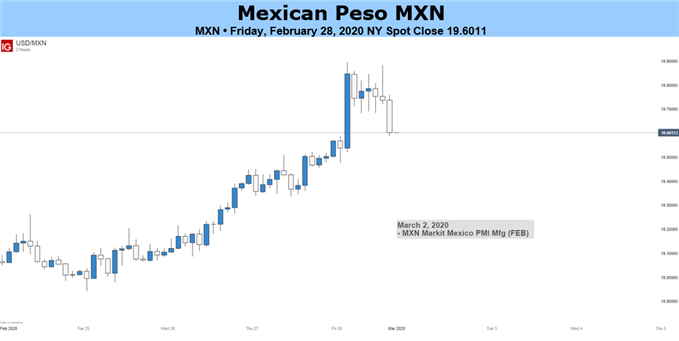 After a chaotic week in financial markets, Mexico has confirmed it now has two cases of coronavirus. Its health minister, Hugo Lopez-Gatell, confirmed on Friday that one person in Mexico City and one in the northern state of Sinaloa have contracted the deadly virus, just days after Brazil confirmed the first case in Latin America.

The Mexican Peso retreated further on this news, taking the weekly drop to 4.8% against the dollar. It’s performance against the euro has been even worse, with EUR/MXN jumping more than 7% to two-week highs, but that is mostly due to the heightened euro weakness leading into the new year before the coronavirus scandal.

The Mexican currency has now seen 7 consecutive days of weakness as investors move away from riskier assets and pile in to treasuries and safe-havens. Before then, it was enjoying a period of significant growth due to its volatility adjusted carry trade, one of the highest in the world. Before last week, USD/MXN had fallen 8.6% from 2019 highs, but that has almost fully been reversed. The pair is now trading above the symmetrical triangle pattern that was in play since the beginning of 2017 and was broken to the downside in December 2019.

Mexico has been on high alert since Wednesday when the first case of coronavirus in Latin America was confirmed in Brazil and US confirmed cases rose to more than 60. The country’s officials have assured that they are well prepared to confront an outbreak, but it is inevitable not to think back to the 2009 outbreak of the swine-flu variant influenza and how it was handled by the authorities. The Mexican Peso is likely to remain highly sensitive to further developments of the virus in the region.

Last week I reported that the USD/MXN had set up a bullish patter on Friday’s candlestick, leading me to believe that the pair would continue to edge higher during this week. That was when the pair was shy of the 19.00 handle, a week later and the price has slashed through various resistance lines and is now closer to 20.00 than to 19.50. The short-term bias remains upward, but we could see some correction come in to play in the next few days.

After clearing all its simple moving averages, USD/MXN is now set try and push above the 76.4% retracement level from the 2019 highs (20.26) at 19.85, where the pair has found resistance in the past. The price action on Friday also suggested possible short-term resistance at 19.89 before heading towards the 20.00 handle. The MACD shows that the bullish trend is at its highest since November 2016.