USD/MXN Outlook: Growth to Return to Mexico in 2020 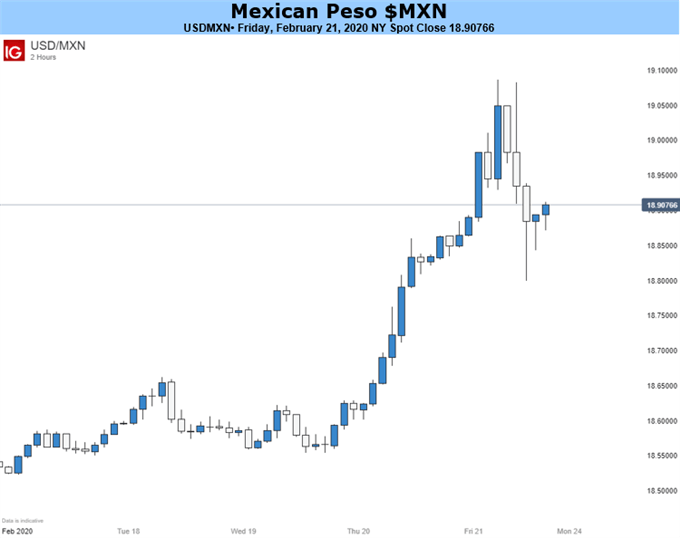 USDMXN has been oscillating around the 18.80 mark for most of the new year, but Thursday’s session saw the pair clear that level as the US Dollar shot up. It now seems like the pair has created a bottom around the 18.60 level as Friday’s candle shows to be highly bullish, indicating that upward gains will continue into the new week.

This market has been coming off from the August 2019 highs, continuously pushing the pair lower despite the gains in the Mexican Peso not being supported by economic data. But recent market risk-off sentiment, which has seen some trouble for global equities and growth-correlated assets, seems to have caught up with Mexico, following a shift of money away from emerging markets, despite the peso’s resilience in the last few weeks.

FINANCE MINISTER FORECASTS A RETURN TO GROWTH IN 2020

Mexico’s finance minister, Arturo Herrera, has forecasted the country’s economy will return to growth in 2020, after posting the worst economic performance in a decade in 2019. Last year saw the Mexican economy contract by 0.1% after almost 10 years of expansion, but the minister points out that the fall in GDP was in line with the current global growth landscape, which has seen economic activity become sluggish worldwide.

He argues that inflation and debt levels are in check, the peso is stable, and the troubled state oil company known as Pemex has halted a production decline. The main boost for the country will come from the ratification of the reworked North American free trade agreement, now known as USMCA.

The Mexican Peso’s main selling point is its inflation-adjusted carry trade value, which is the highest amongst the G20 currencies, despite Mexico’s Central Bank going through a cutting cycle which has seen 5 consecutive rate cuts, reducing the rate by 1.25% to the current level of 7%. But Herrera notes that there is more room for cuts in 2020, with an analyst poll expecting another 0.5%to come off during 2020 to cope with the country’s subdued inflation.

Despite continuous attempts by the Dollar to reverse the downtrend in previous weeks, the velocity at which the pair shot up in Thursday’s session might be suggesting that a longer-term upward reversal may be coming into play. USD.MXN managed to clear the key support are between 18.73 and 18.49, which has kept the pair range-bound for most of the last two weeks.

On the 4-hour chart we can see how Friday’s breakout found some resistance at the 19.08 mark, a key confluence area (red oval) at the end of October going into November just before the symmetrical triangle pattern was broken in early December. A sustained rally above the 19 handle would clear the support area and head towards the 19.40 line which marked the downward break of the triangle, hinting towards a topside break.

If price action fails to capitalise on this push higher, we could see USD/MXN head towards that key support zone again, with initial support found at 18.73. Any further bearish momentum could make the pair become range-bound again as it waits for a solid direction.