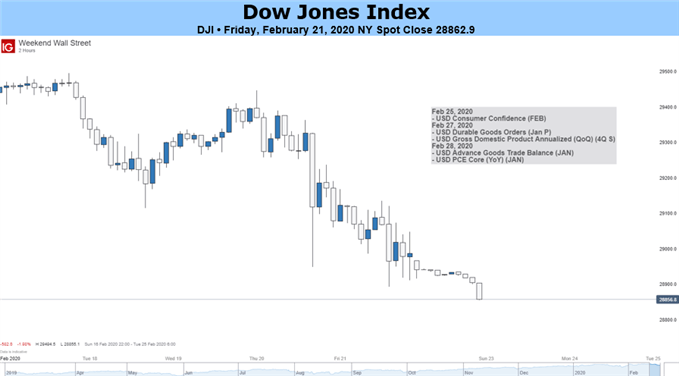 At the beginning of last week it looked as though the Dow Jones and Nasdaq were impervious to the slew of fundamental concerns that had worked to spark significant developments in the foreign exchange, commodity and bond markets. As the week progressed, however, risk aversion finally materialized and the US equity market came under pressure – a long awaited development for some.Looking ahead, price action in gold and the Australian Dollar could suggest the Dow Jones and Nasdaq are susceptible to further declines.

To be sure, the global economy is under threat. Prior to the outbreak of the coronavirus, major economies like Germany and Japan had already begun to show signs of weakness and global shipping was on the decline. Now that the world’s second largest economy – one that possesses significant manufacturing responsibility – has had to quarantine multiple cities and shutter businesses for weeks, the pressure may be excruciating. 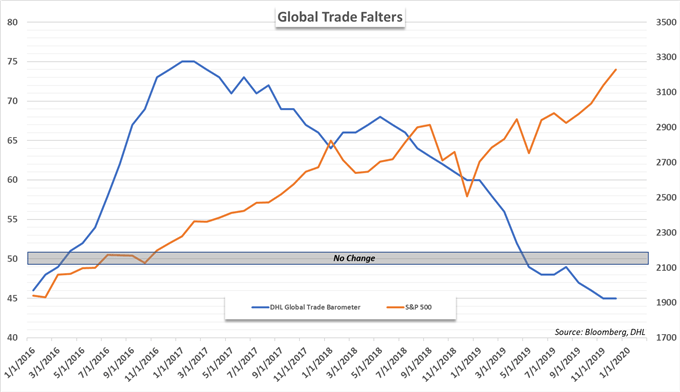 While central banks have looked to ward off prior slowdowns with monetary policy, many of the traditional avenues have already been explored which has left central banks with less ammunition to fight a deeper contraction should one materialize. That being said, the bearish price action that took hold on Thursday and Friday does not mean the global economy is destined for ruin and stocks are about to plunge.

However, it does indicate that some investors have grown weary of current stock valuations given the broader outlook. In turn, investor sentiment stands at a critical juncture and the abruptness of the initial shock to the Nasdaq on Thursday could suggest prices are growing increasingly fragile. Should markets be offered further negativity in the form of economic data, coronavirus developments or a theme yet unknown, it could offer the final evidence required for bears to arrest control of price action and push prices lower still. 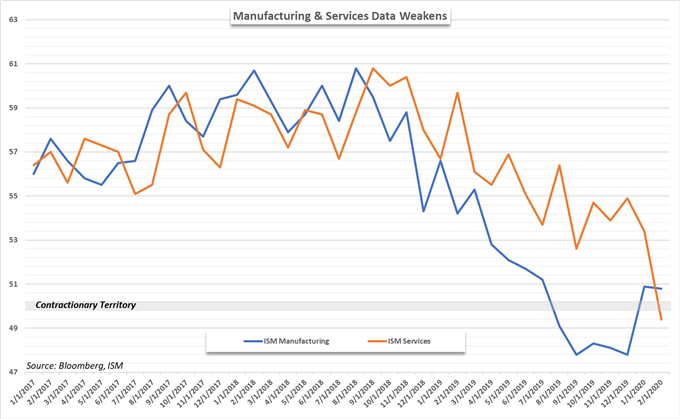 That said, investor sentiment can be a fickle attribute of the market and the current bull run has displayed its ability to almost entirely ignore traditionally bearish developments at times. With that in mind, I think the Dow Jones and Nasdaq are vulnerable to further weakness but if bulls look to drive the indices higher early next week, it may be best to wait out on the sidelines as “the market can stay irrational longer than you can stay solvent.” I discussed this theme at length in last week’s stock market webinar.

The DAX 30 also suffered last week after the German economy was revealed to be in a precarious position. Teetering on the brink of recession, Germany may have to explore fiscal policy change or further monetary easing from the ECB if it is to stave off further economic contraction.

While both possibilities have been explored, administrators have not yet locked in a decision and the DAX may suffer consequently. In the shorter term, a broader improvement in risk appetite would likely work to buoy the German equity index but it will have to weather a string of high-impact economic data due next week. In the meantime, follow @PeterHanksFX for updates and insights.

The outlook is similarly grim for the Nikkei 225 after the Japanese economy suffered a precipitous decline in economic growth following a sales tax increase. At the threshold of experimental monetary policy, the Bank of Japan has few options to stoke growth as its economy grapples with an aging population. 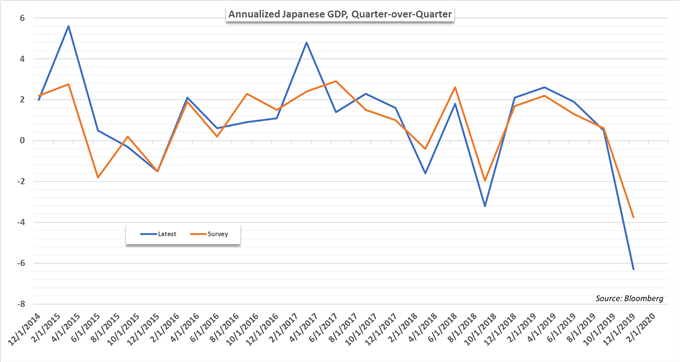 Faced with the unknown consequences of the coronavirus, the Nikkei 225 does not appear to have the fundamental backdrop to evidence price gains. Therefore, the index may gyrate between technical levels in accordance with risk trends elsewhere.