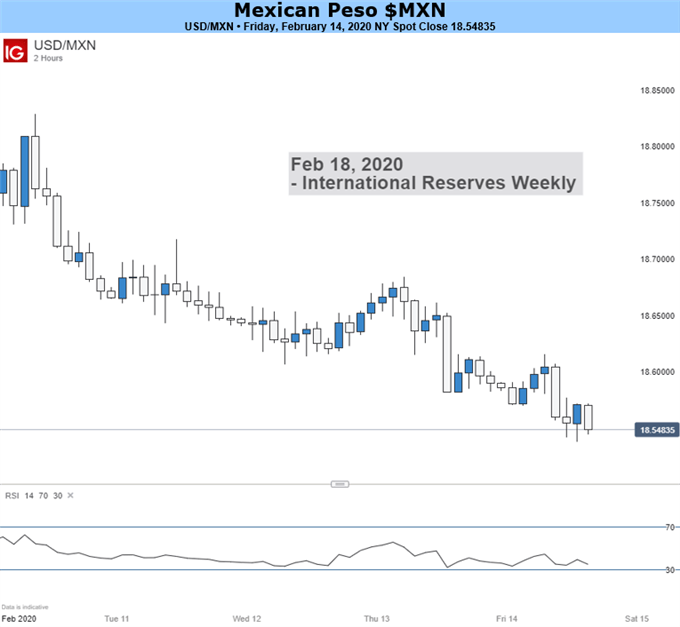 The Mexican Peso has once again managed to regain the upper hand against the US Dollar in this week’s market showdown. Risk-off sentiment dissipated slightly, and equity markets reached all-time highs throughout the week as demand for growth-correlated assists increased.

And no stranger to this risk-driven surge in markets was the Mexican Peso, which has continued to appreciate since the beginning of December 2019, gaining 5.4% against the US Dollar alone. And there is no real reason as of now as to why the coin would flip, causing a shift in demand towards the Dollar, unless there is new round of generalized risk-off sentiment, given that the carry trade in this currency pair remains in favour of the Peso.

As mentioned previously, the economic data in Mexico has not been outstanding as of recent, but we have seen a mild improvement in jobs data and an uptick in inflation. In its previous meeting, Mexico’s Central Bank (Banxico) had warned that there were still persistent risks to underlying inflation and economic growth, causing markets to believe a 25-bps cut would follow.

And indeed, it did, as the central bank decided to cut the main interest rate by 25-bps to 7% on Thursday afternoon. In their report they noted that economic conditions remained challenging worldwide, which had prompted many central banks to adopt a low interest rate and accommodative monetary policy as a response to weakening growth. This has kept domestic growth stagnant in the last few quarters, prompting a downward revision in growth for 2020 and an accommodative monetary policy in response.

Inflation has notoriously been an issue in Mexico, reaching levels above 6% in 2018, and resolving it is not as easy as adjusting interest rates, given the issue is based on structural problems in its economy. So Banxico is left in a tricky situation trying to balance stimulating economic growth whilst controlling inflation, given than the latest reading came in at 3.24%, above it’s target rate of 3%. This is likely the reason why rate cuts have been kept at 25-bps and spread throughout various months, even though a 50-bps cut would have been justified at the previous meeting.

We can see from the daily USD/MXN that price action has remained on the downside this week, avoiding the upward reversal in the latter part which we have seen in previous weeks, which reinforces the Peso’s dominance over the Dollar.

Its price has now fully entered the support zone we’ve highlighted in the past, so we can expect USD/MXN to tend towards its lower bound at 18.49, eyeing August 2018 lows at 18.40. Moving averages are now placed in descending order above the price, which shows that momentum in the downward trend is still high. The 50-day SMA continues to track the lower bound of the descending trendline, so an upward reversal may see initial resistance at 18.81, before heading higher towards the 19.00 handle.

As with last week, price action will follow the path of least resistance, which at this point continues to be lower. A resurgence in risk-off sentiment would see an upward correction come in to play, but the effect will probably be short-lived.