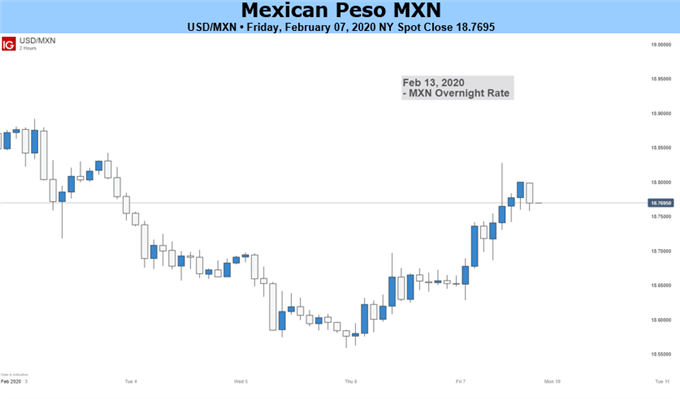 The Mexican Peso has managed to remain strong and overpower the US dollar once again, despite no strength in its underlying economy.

At the end of last week, we analysed how the coronavirus outbreak was having a negative effect on risk-on assets like the Mexican Peso, which had enjoyed a recent period of strength given the relative calm surrounding markets in the month of December.

The Mexican currency weakened around 1.3% against the US dollar towards the end of last week, but price action reversed again as the new week started, causing a further 1.76% drop in USD/MXN, reaching levels not seen since October 2018, around 18.56. But towards the end of this week, price action has once again turned to the upside and the dollar seems to be regaining the upper hand. But how sustainable is this price action pattern?

Mexican inflation ticked up in the month of January, partially due to higher taxes and a surge in agricultural prices. The year on year figure came in at 3.24%, up from 2.83% in the previous month. Despite being above Banxico’s target rate of 3%, the central bank warned in December’s meeting that there were still persistent risks to underlying inflation and economic growth, sparking speculation that another 25-bps cut will follow at their next meeting, which will take place next week on Thursday the 13th of February.

A Bloomberg poll on the likelihood of a rate cut at next week’s meeting showed that out of 9 expert EMEA analysts, 8 of them believe rates would be reduced by 0.25% to 7.0%, whilst the remaining analyst expected rates to remained unchanged at 7.25%. If this were to happen, we would expect to see some weakness in the Mexican Peso, diminishing its value as a carry trade currency, currently one of its most valuable traits.

Chart 1: Bloomberg poll on the likelihood of a rate cut on February 13 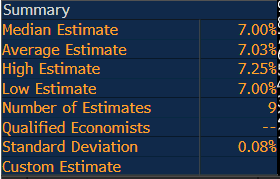 If we look at the USD/MXN daily chart we can see that the price action has followed a similar pattern to the one we were analysing at the end of last week. USD/MXN entered the key support level on Tuesday and remained range-bound as the dollar was supported near the 18.60 handle.

The upward surge in Friday’s session has seen the pair erase most of the losses experienced during the week, but risk remains on the downside in the near-term. The 50-day SMA has tracked the upper bound of the descending trendline since the end of January, so we could see some near-term resistance around 18.85, which would push higher towards the USD/MXN 19 handle if broken.

It looks at this point that price action will follow the path of least resistance, which at this point seems to be lower. A resurgence in risk-off sentiment would see an upward correction come in to play, but the effect will probably be short-lived. Key focus will be on next week’s interest rate decision meeting and the rhetoric used by the Central Bank to describe their growth prospects.

Despite its performance in the last few months, the longer-term expectation is that price action will return to the higher rage of 19, supported by strength in the US economy.