Recommended by Michael Boutros
See the DailyFX analysts’ Q1 forecasts for key markets.
Get My Guide

We are coming off of holiday-curtailed conditions and already there is market turbulence showing up in the opening days of 2020. Ahead, the first full week of the year, we will face a new systemic risk that will complicate the familiar themes. Geopolitical tensions are not exactly new for global financial markets, but we have not had to deal with many such threats recently – or at least the market has not paid what has been unfolding any serious mind. That is until now. The news late this past week that the US had struck a base in Iraq that killed one of Iran’s top generals sent risk-leaning assets like US indices and Yen-based carry trades tumbling while safe havens such as gold have surged. Is this a theme that will usher in a permanent volatility for the new year or will the market retreat back into obliviousness as it did with the last US-Iran flare up?

Geopolitical risks aren’t the only open-ended theme on tap moving forward. Trade wars, recession fears and monetary policy will all stir in the week ahead. From the trade perspective, the US and China are supposedly due to sign the phase one deal the week after, but former’s conflict with Europe is still on the path of escalation. For growth concerns, the optimism in a trade thaw is threatened by the manufacturing tremor seen in data this past week. The United States’ ISM service sector report will speak to that concern particularly. Then there is Friday NFPs, an event capable of charging trader interest all itself; but also a key measure for monetary policy considerations.

All of this event risk – scheduled and unscheduled – will be met with a more rapt audience than we have seen in previous months. With evidence of volatility already in hand, there is a higher probability that sparks can trigger more significant movement moving forward. That could prove remarkable for charts like the S&P 500 which is just off record highs or gold which is on the cusp of reaching a new multi-year peak of its own. Meanwhile, crude oil prices are moving out of a well-established range while EURUSD is threatening to do the same. Has the fuse been lit for these key markets? 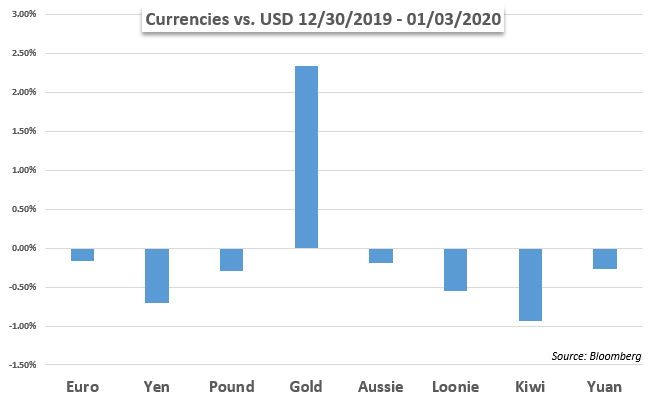 Gold prices have recovered a little over five percent after bottoming out in November, and upside momentum continues to be strong as XAU/USD approaches a key resistance range.

The Australian Dollar has gained sharply on a broad improvement in global risk appetite. That seems unlikely to be derailed this week, but watch events in the Middle East closely

Diplomatic relations between the US and Iran have deteriorated rapidly and any further escalation of military action between the two will drive further demand for safe-haven assets.

Pound trades on the defensive to begin the year as UK data remains soft. Next Week will see US NFP in focus, while UK PM Johnson meets Von Der Leyen.

Sterling is virtually unchanged this week with price threatening a larger pullback into the January open. Here are the levels that matter on the GBP/USD weekly chart.

The Australian Dollar lost momentum and is more at risk to reversing against the US Dollar. For now, key support keeps uptrends in AUD/USD, AUD/JPY, AUD/CAD and GBP/AUD intact.

A flare-up in US-Iran tensions saw risk aversion spike on Friday as investors assessed the potential for a wider conflict. Will geopolitics erode the Dow Jones and DAX 30 further?

US Dollar Reversal Staves Off Bear Trend, But Will Support Hold?

A holiday bounce fended off what could have otherwise been a progressive bearish reversal for the US Dollar. With a three-month gradual bearish slide and a few key support levels broken, what is next?

The Canadian Dollar could be on the verge of breaking out against the US Dollar after prolonged consolidation. NZD/CAD and CAD/JPY may decline as GBP/CAD aims cautiously higher.

US Dollar Outlook Brighter in New Year After Late-2019 Drop

The US Dollar may return to the offensive as 2020 gets underway after a selloff in the final months of last year brought the currency to an eight-month low.