The Dow Jones experienced considerable volatility last week as an unexpected geopolitical flare-up rattled risk appetite. Although open conflict has been avoided for the time being, the potential for a spiral of retaliatory attacks is very real and a wider military engagement could undermine equities further while boosting crude oil especially if the Strait of Hormuz is threatened. Nevertheless, the situation is unlikely to spark a serious retracement in stocks as the likelihood of a direct military conflict between the two nations is perceived to be minor.

Although a steep decline is unlikely, the Dow Jones finds itself in a lofty position after surging during December. Trading narrowly beneath 28,700, speculators will have to decide if the fundamental backdrop can accommodate an extension higher or if consolidation is in the cards. To that end, investors will keep close tabs on the Fed’s balance sheet for any signs its growth has slowed after the Fed previously hinted liquidity injections may cease in mid-January. 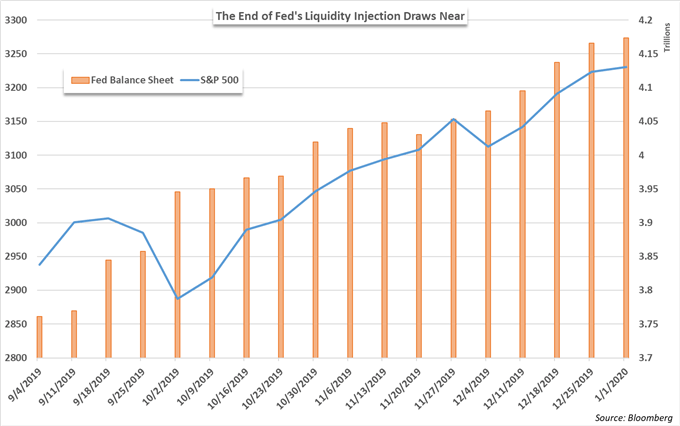 Since the Fed’s most recent round of quasi-QE, or “not QE” as it is sarcastically referred to amongst some analysts began in September, the market has climbed in lockstep with the Fed’s balance sheet. Therefore, if repurchase agreements grind to a halt and liquidity drains, many market pundits believe the S&P 500 and Dow Jones may fall under pressure. With that in mind, it appears as though the Fed may look to take certain stage once again unless Iran mounts a retaliatory attack.

Since the economic calendar in the week ahead is rather sparse, the German DAX 30 may take its cues from the Dow Jones and other US indices. If risk appetite is renewed, expect the DAX to edge higher along other risk assets. That being said, the longer-term outlook for the German equity index is rather optimistic. Hints of fiscal stimulus working in conjunction with loose monetary policy could align to drive the DAX higher as the year progresses.