The Dow Jones slipped from record levels last week as markets realized a phase one trade deal could be a pipedream, especially before the end of the year. The realization sparked a broader reassessment of the index’s valuation, which was evidently too high given the shift in the probability of a trade deal. While the US-China trade war was largely responsible for last week’s pressure, it could look to offer further influence in the week ahead following a report on Friday from Reuters. 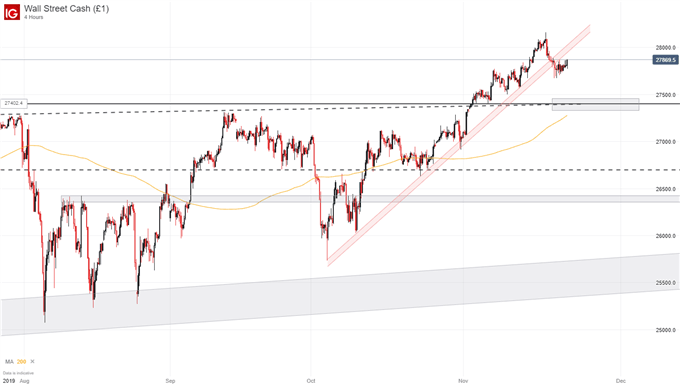 The report suggests further headwinds for Huawei suppliers like Micron and other chipmakers, an industry that has already been plagued by trade war hurdles and slowing global growth. Further, Chinese officials could look to retaliate to the vote as they have previously expressed the importance of Huawei to their strategic goals. Retaliation to the decision would likely come in the form of undermining the state of trade progress, which would likely work to pressure the Dow Jones further.

While investors await the more-fluid developments, the market will also look to digest scheduled economic data in the form of advance goods trade balance, consumer confidence, durable goods orders, GDP and PCE core. Evidently, traders have a lot to look forward to and the constant stream of high-impact economic data could stir volatility.

Like the Dow Jones, the DAX 30 could have its hands full with trade war headlines. While the impact of US-China developments is far from negligible, it was recently announced the United States is looking to investigate the European Union under Section 301 – a statute that covers unfair trade practices – and explore applicable tariffs. The announcement comes after President Trump allowed the Section 232 investigation into possible auto duties expire on November 14. Therefore, while the US-China trade war threat to the DAX is very real, any indication that the United States has taken aim at the EU directly could elicit a more drastic response. 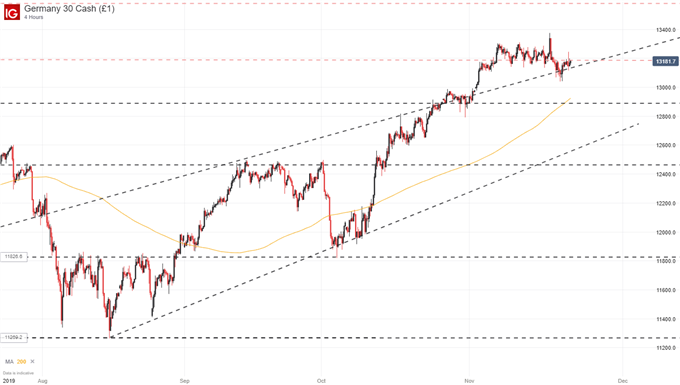 Meanwhile, the DAX is also due for an injection of fresh economic data with the release of German CPI and unemployment, followed by Eurozone CPI.

While the Dow Jones and DAX 30 look to economic data, the UK equity index will likely keep its eye on the political landscape. With Boris Johnson enjoying a comfortable lead, it looks as though the Prime Minister will retain control after the December 12 general election. Although many believe the general election will break the longstanding parliamentary deadlock, time until the new January 31, 2020 Brexit deadline is quickly expiring. 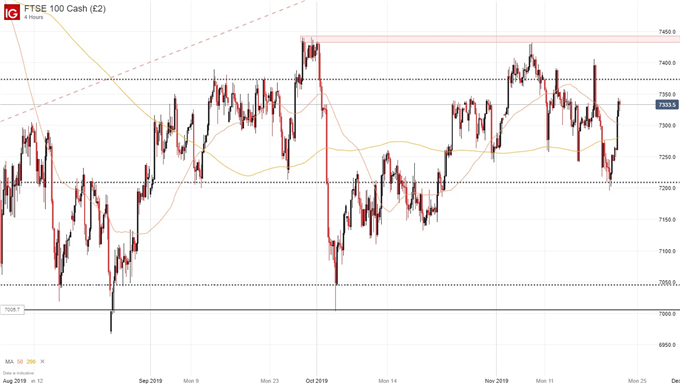 As it stands, however, the market largely believes reelecting Prime Minister Johnson produces good odds of a Brexit deal, so if he should begin to slip in the polls to another candidate that may not produce a deal, the FTSE 100 could falter.