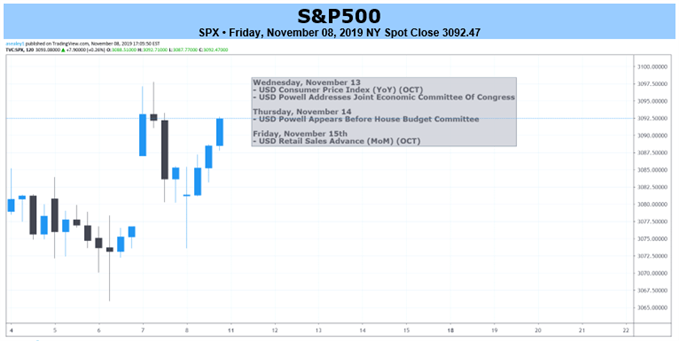 Stocks continued their ascent last week, negotiating a series of trade war headlines that ranged from ominous to optimistic. After days of back and forth, President Trump set the record straight on Friday, saying “the United States has not agreed to a tariff rollback with China.” The President’s comment refutes earlier statements from Larry Kudlow and reports from several Chinese and American news agencies.

Evidently, optimism was still present as the Dow Jones closed higher for the week despite a modest retracement on Friday. In the week to come, however, market participants will have to decide whether the initial boisterousness was warranted given the immaterial progression in the talks.

On the other hand, the DAX 30 may look to enjoy a materially bullish development. November 14 marks the long-awaited deadline of the Section 232 auto tariff investigation on the European Union by the United States. The Trump administration has had the threat at their disposal since May, but recent statements from various US officials seem to suggest the tariffs are off the table – thus removing a key uncertainty for the European economy and Germany in particular.

It could be argued the news has already been priced in, and gauging by the DAX’s recent surge, would be entirely valid. Still, the recent back and forth from officials on US-China trade war progress highlight a somewhat disjointed understanding amongst administration officials. Thus, it may be prudent to wait for the official deadline to pass or a statement directly from President Trump before declaring the uncertainty remedied.

Shifting to the FTSE 100, Brexit has not yet been remedied either – translating to continued uncertainty for the nation and the equity index. As it stands, the UK is set to undergo a general election on December 12 which will set the stage for the remaining time ahead of the new January 31, 2020 deadline, resulting in a relative lull in Brexit volatility in the meantime. The calm in Brexit headlines could allow the FTSE to look elsewhere for influence – like Monday’s release of UK GDP - while simultaneously keeping a lid on gains.

As the week ahead progresses, check back at DailyFX for updates on the major fundamental and technical developments across the equity world, like the reaction to US CPI data due Wednesday.