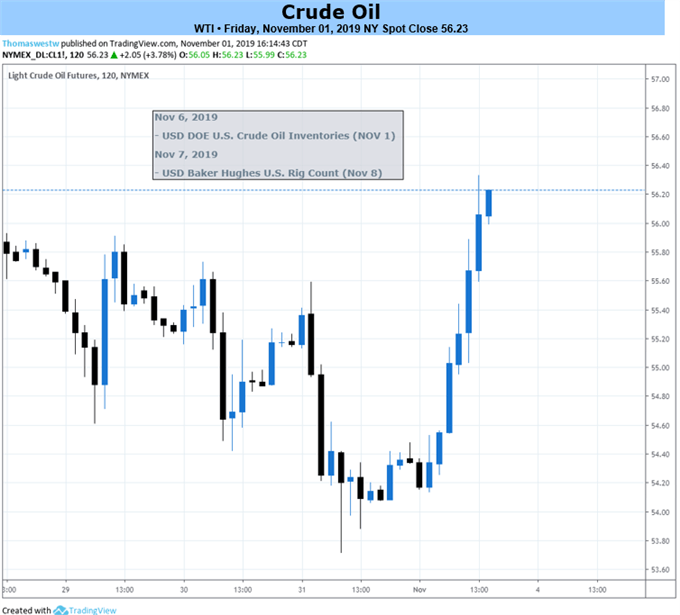 Crude oil prices may come under selling pressure if OPEC’s World Oil Outlook forecasts weakening demand against the backdrop of deteriorating US-China trade war negotiations. The downward move may be amplified by global growth concerns from comments by the World Bank President against the backdrop of yet another cascade of corporate earnings throughout the week. Can escalating US-Iran tensions mitigate a selloff?

On November 5, the Organization of Petroleum Exporting Countries (OPEC) will publish its World Oil Outlook (WOO). The industry has been burdened this year by weakening demand amid a “synchronized slowdown”, which has pressured producers and forced major players to adopt supply-cutting policies. So far, it appears cuts in production have not been able to override the downward forces of formidable fundamentals.

One of the biggest headwinds to global growth and upside movement in crude oil prices is the US-China trade war. Efforts towards reaching a meaningful data have so far been futile, and even agreeing on a “Phase 1” accord in a multi-sequential arrangement has proved difficult. Last Thursday, China expressed doubt over the possibility of arranging a long-term trade deal with US President Donald Trump.

Relations between the two are also being bombarded by a myriad of peripheral irritants that may become central issues later. These include the US House passing a bill in support of Hong Kong protesters – which Beijing promptly condemned and threatened to retaliate – and China’s WTO complaint against the US. The latter may award China the right to impose $2.4 billion in sanctions against the US over a dispute during Obama’s tenure.

Markets will once again be hit with a cascade of third-quarter corporate earnings data, including from major market players like Berkshire Hathaway, Walt Disney and many others. if revenue streams from these landmark firms show thinner profit margins, it could further magnify the same forces that are weighing crud oil prices. More specifically, fears about global growth and demand for key energy inputs like oil.

On Thursday, Secretary of State Mike Pompeo announced additional sanctions against Iran, targeting its construction industry and missile programs. The restrictive measures also included a provision on extending curbs on the country’s nuclear program. The escalation in tensions could renew politically-induced supply disruption fears, but they will likely fail to overcome selling pressure from other fundamental factors.