Where To With Recession Fears, Trade Wars and Brexit In the Headlines?

Risk trends have held up well this past week despite a constant battering from recession fears and the growing concerns that trade war traction is slipping. With Brexit headlines over the weekend setting up a volatile week’s start and EURUSD attempting to run a reversal ahead of the ECB on months of bearish retreat, key moves may take root or collapse ahead.

Crude oil prices may encounter significant selling pressure if China retaliates against the US and pushes back trade war talks after the House passed a controversial bill over the Hong Kong protestors.

Data prints coming out of the US economy may continue to drag on the Dollar as fears of a looming recession boosts bets for another Fed rate cut.

The Australian Dollar could reverse gains if Brexit is forced to be delayed. Global growth slowdown woes and other fundamental risks may also undermine AUD/USD upside progress.

Gold remains stuck in a range as a range of conflicting forces battle and fail to take control of price action.

Dow Jones, Nasdaq 100 and DAX 30 Forecasts for the Week Ahead

The Dow Jones and Nasdaq 100 will await key earnings from some of the world’s largest manufacturers and tech companies while the DAX grapples with freshly-imposed tariffs.

The positive momentum in the Euro continues to build with the currency seeing its third consecutive and largest weekly gain since June.

Crude oil prices are consolidating above a key support zone we’ve been tracking for more-than three months now. Here are the levels that matter on the WTI weekly chart.

The US Dollar might be in the process of reversing its two-year uptrend, but technical positioning cautions eager sellers against over-committing.

The GBP/USD may be carving out a 4-year bearish candlestick pattern as the EUR/GBP downtrend prolongs. GBP/JPY may rise but be wary of Brexit risks clouding technical analysis.

AUD/USD Outlook May Struggle to Fulfill A Developing Reversal

AUDUSD earned the biggest two-day rally since the end of January to close this past week – a move that would also clear congestion. Has the Aussie Dollar secured its lasting reversal?

XAU/USD: Gold Price Charts on the Cusp of Major Breakout

Spot gold prices have consolidated since the commodity’s impressive rally ran out of steam last month, but the healthy pullback toward technical support could springboard XAU/USD to fresh YTD highs. 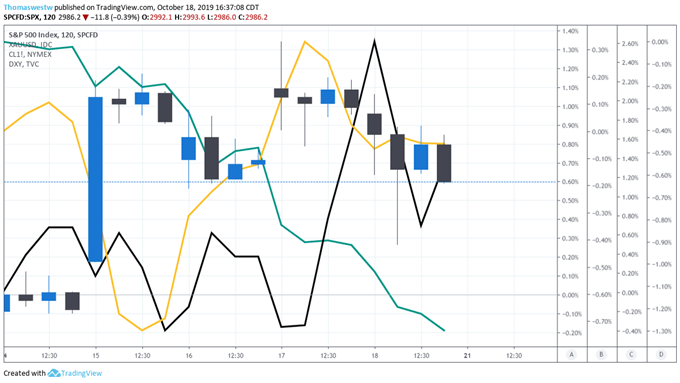