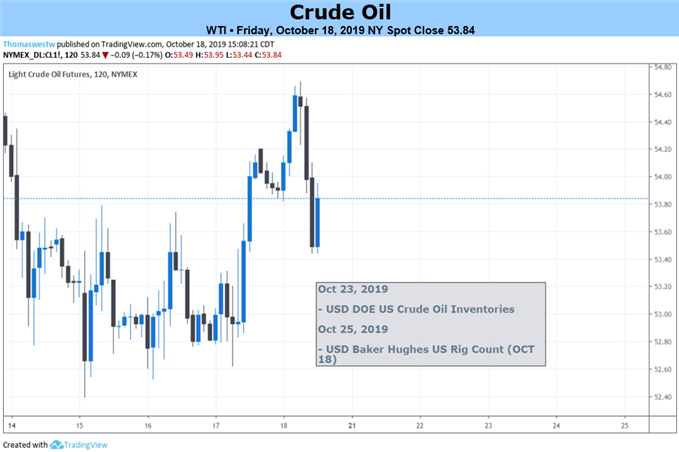 Last week, US President Donald Trump announced China and the US were close to reaching “Phase 1” in their multi-sequential trade agreement, though the former insisted on more talks before signing anything and moving on to Phase 2. However, diplomatic relations between the two recently soured after the House passed a controversial bill in support of the Hong Kong protestors.

The next step is for the Senate to pass it and a large number of Republican officials have come out in support of the bill. Beijing responded to the initial news by condemning the US’s actions and vows to retaliate soon. This setback could spill over into US-China trade talks and make the prospect of reconciliation even less likely. Undermine these circumstances, crude oil prices could experience significant downside moves.

Last week, the IMF revised down its global growth projection for 2019 to a new post-recession low at three percent. The newly-appointed director of the crisis-lender Kristalina Georgivea warned of a “synchronized slowdown” amid strained international trade relations. The ever-worsening fundamental outlook continues to be a primary factor weighing on global demand for crude oil: a vital input in almost every major industry.

Manufacturing data out of major powerhouse economies continues to slide and is now slowly beginning to spillover into service sector; at least in the Eurozone according to ECB Governing Council Member Ignazio Visco. Furthermore, political contagion from trade conflicts in OECD countries is now oozing into the developing world and creating inter-emerging market trade wars that are further straining global supply chains.

In the week ahead, a cascade of key US economic data will be published that could cool ultra-aggressive easing expectations, though this may not bode well for crude oil prices. Equities – which frequently move in tandem with Brent – typically contract when the Fed fails to meet the market’s lofty dovish expectations. Therefore, if the data shows the need for rate cuts is not urgent it could sour sentiment and dent crude oil prices.

The short answer is “probably no”. Since the start of 2019 – after the plunge in crude oil prices and equities at the end of 2018 – OPEC has implemented production cuts in an effort to squeeze supply and boost prices.

Despite this promise and OPEC’s efforts to stave off a supply glut, Brent continues to be pressured by fundamental factors. It has been boosted by the occasional supply disruption fear from political risks like the recent attack against Saudi Arabia’s Aramco oil processing facility. However, the potency of these threats and OPEC supply cuts may not be strong enough to overwhelm the downside pressure of waning global demand.