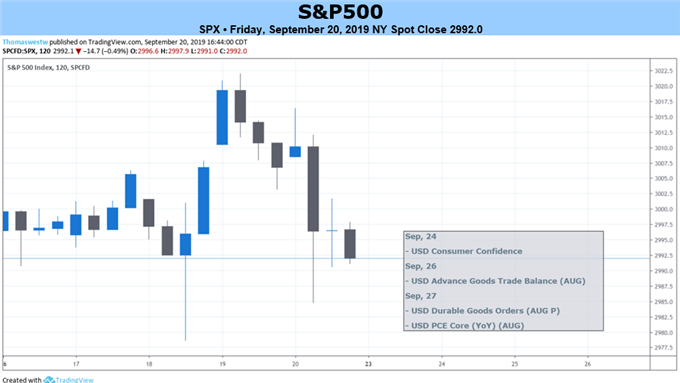 The major stock indices saw modest losses last week as a pivotal FOMC meeting came and went alongside subtle shifts in the US-China trade landscape. Left to sift through the transcripts, the Dow Jones was able to stem initial losses post-FOMC after Fed Chairman Jerome Powell hinted at the possibility of quantitative easing. Despite the uncertain policy path, the willingness of the Fed to explore expanding its balance sheet was seemingly enough to sate the market’s lofty dovish desire - for the time being.

Still, Friday saw the reemergence of trade tensions when US President Donald Trump said ending the trade war by 2020 is not a priority. President Trump also announced he “would not accept a partial deal on trade.” In response, Chinese agricultural delegations cancelled trips to both Montana and Nebraska where they were expected to meet with delegates from the US agricultural sector.

Together, the commentary and cancellations removed an opportunity for both sides to build goodwill and negotiate. Consequently, deeper concern over the status of an interim trade deal could likely take a hit over the weekend and early this week. Thus, traders should tread cautiously as the Dow Jones confronts all-time highs and deteriorating trade relations with China.

On the other hand, the DAX 30 was able to weather the fundamentally loaded week without a notable change in price. Closing effectively flat for the week, the DAX may yet suffer alongside the Dow Jones if trade tensions pickup in earnest. Frequently teetering on the brink of a recession, the German economy can ill afford more bad news. Any indication that the trade war will worsen could look to undercut the recent impact of a dovish ECB.

To that end, ECB President Mario Draghi is scheduled to testify in front of European Parliament on Monday which could offer the opportunity for further insight on his plan for the bloc’s monetary policy path. Similarly, Mr. Draghi will speak in Frankfurt on Thursday – providing another instance where markets can attempt to glean insight from the ECB’s head. Apart from the speeches, high-impact Eurozone data is relatively sparse.

The FTSE 100 found itself in familiar territory last week as it lagged the DAX, despite comments from European Commission President Jean Claude Juncker that revealed he would accept a Brexit deal if the objectives of the Irish backstop were achieved through other arrangements. The Pound Sterling rallied on the news and the shift in tone could similarly improve the fundamental standing of the FTSE 100. Therefore, traders should keep a watchful eye on any forthcoming Brexit developments in the week ahead.

As time to the October 31 Brexit deadline dwindles, fundamental developments may possess greater potential to influence price as the time to renegotiate fades. A breakthrough agreement regarding the Irish backstop issues could see the FTSE 100 soar as the likelihood of the United Kingdom leaving the EU with a deal ticks higher. In the meantime, follow @PeterHanksFX on Twitter for updates and analysis on all the major stock indices.