The fundamental environment will grow increasingly tumultuous over the coming week. We wil continue to sort through general themes like the lifting of the US government shutdown and ongoing threats of trade war and Brexit. However, we are also coming into high profile, discrete event risk as well like the Fed’s rate decision, NFPs and Euro-area GDP updates.

Why did the Australian Dollar fall after an upbeat jobs report? The same logic may undermine the impact of CPI data as AUD eyes the Fed and a plethora of US economic statistics ahead.

Factors that dragged global growth forecasts lower could subside which has potential to rejuvenate the world economy and oil demand.

Sterling is coming off its weekly highs heading into the weekend, but the outlook for a reinvigorated British Pound remains bullish.

The US Dollar may be torn between signs of economic resilience domestically and worrying developments abroad. Another round of trade war negotiations is a wild card.

After Gold’s sharp rally on Friday, price rests at a crucial inflection point ahead of the Fed rate decision and US-China trade talks.

The Euro hit fresh 2019 year-to-date lows following the European Central Bank meeting last Thursday, only to find itself having staved off a soft performance by the end of the week. Upcoming Eurozone GDP and inflation data will underscore the concerns laid out by the ECB last week.

The US stock market will look to earnings from some of the major corporations like Microsoft, Amazon and Facebook. Elsewhere, the DAX will look to German employment data. 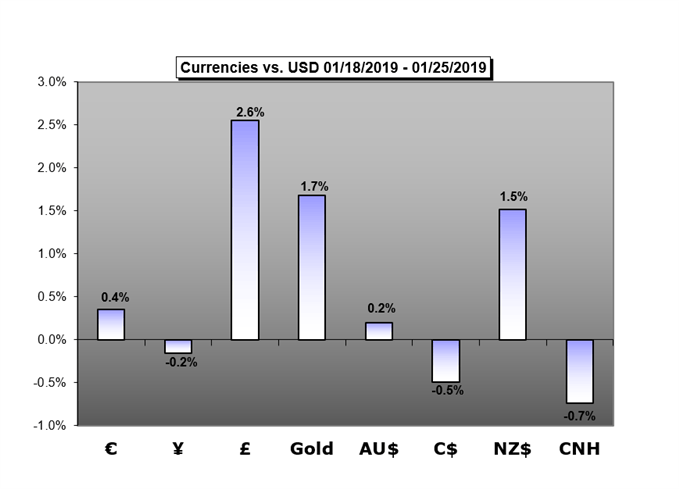