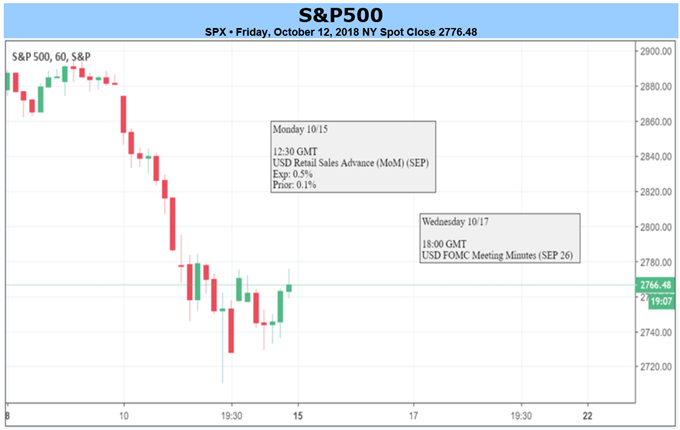 FTSE 100: Deal or No Deal as Investors Eye EU Summit

The FTSE 100 saw its largest weekly decline since February with losses of over 4% amid the spill-over selling from US equity markets. Consequently, the FTSE 100 saw break below the September lows, before meeting support around the psychological 7000 level. As we look ahead to the upcoming week, the focus for investors of UK assets will be on the latest developments regarding Brexit. Donald Tusk once described the October EU summit (17-18th) as the moment of truth for Brexit and indeed this will likely be the case with participants who are positive amid the recent rhetoric from the EU and UK, hoping that the summit will yield a Brexit deal. A withdrawal agreement could see 6840 (2018 low) come in focus.

Elsewhere, a slew of UK data is to be released, most notably the latest inflation figures. However, given that the Bank of England has largely remained on the backseat with Brexit the main driver, it is possible that price action from data points may be somewhat muted.

The FTSE MIB is now in a technical bear market, having dropped 20% from the peak reached in May with the index now sub 20,000. Concerns regarding the Italian budget continue to grip the index and next week may be no different with the Italian government set to submit their budget proposal to Brussels by the October 15th deadline. Given the recent rhetoric from the EU, it is likely that the budget will be met with some criticism, which in turn could keep Italian assets volatile as concerns over the budget being rejected by Brussels increase, setting both Italy and the EU on a collision course. Key focus will be on the Italian banking index if Bund-BTP bond spreads widen on souring sentiment.

DAX: Is a Headache on the way for Merkel?

German state election results for Bavaria will be announced over the weekend with polls suggesting that Chancellor Merkel will have to brace herself for a setback. Merkel’s sister party, the CSU, may be looking at their worst performance since the 1950s with opinion polls moving in favour of the far-right Afd Party and the left Green Party. Consequently, the DAX could be shaping up for a volatile start to the week, provided opinion polls are correct with the Bavarian election outcome likely to be seen as a bellwether for the rest of Germany.

DJIA: Can the Equity Sell-Off be Saved by Earning Season Once More?

The bond rout of last week which took 10yr yields towards a 7yr high, alongside a repricing of a slowdown in growth for 2019 had been among the touted factors behind the sell-off in equity markets. A similar sell-off was seen back in February, however, the strength in corporate earning helped put US equity markets back on the mend. The question is, can Q3 earnings support stocks again?

Amid the escalating trade war between the US and China, profit margins may begin to be feeling the squeeze with cost pressures starting to rise, while a tightening labour force may have also pushed wage costs higher. Elsewhere, the US Dollar saw a notable jump in Q2 and Q3 and as such, this may play a factor in corporate earnings for the Q3 season. Next week will see over 20% of the DJIA to report, with the likes of Goldman Sachs and IBM scheduled.