Market participants will return with caution this week. Following the rout in speculative assets from shares to emerging markets to Yen crosses, there is an understandable tension amongst investors. In this environment troubling news in trade wars, Chinese growth, Euro-area stability or any number of key themes can readily find traction.

Any signs that the Fed could remain hawkish despite the global stock selloff could reignite USD at the expense of NZD, this may overshadow gains on an upbeat local CPI data.

Fresh developments coming out of the U.S. economy may curb the recent selloff in USD/JPY as Federal Reserve officials see a risk for above-neutral interest rates.

After trading to four year highs to open the month, Crude has come off the highs along with risk sentiment, but you crude appears to have fundamental support that could keep bulls confident.

Euro Forecast - Calendar has a Downgraded Role in Current Environment

One thing is for certain about last week: the Euro wasn’t at the center of attention, it was a mere bystander along for the ride. The coming week won’t be all that different, as the economic calendar doesn’t offer much by way of significant data that could distract attention from stresses in financial markets across the globe.

Gold was the beneficiary of safe haven demand this week after the Dow lost over 1,300 points in just two days.

The Australian Dollar held up quite well to the intensification of one or two factors which have stymied it this year. Don’t rely on that continuing 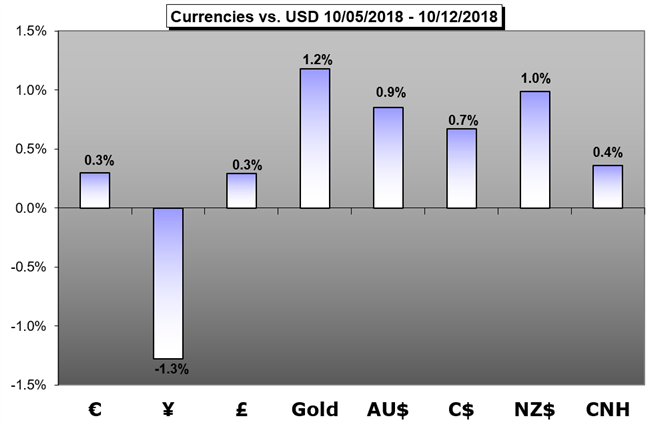