Risk trends were remarkably sanguine this past week in the face of confirmed tariffs placed by the US and China on each other. Don’t expect risk trends or benchmark FX currencies to simply ignore the growing risks going forward.

The US Dollar may rise for a fourth consecutive week as Federal Reserve officials dial up hawkish rhetoric, boosting bets on a fourth rate hike in 2018.

Two significant data releases are due out in the middle of the week, but collectively, the Euro is unlikely to break in a definitive manner as neither release will do much to move the needle on rate expectations.

British Pound Forecast – GBP: Bank of England to Reveal All Next Week

Sterling traders will be one edge next week ahead of ‘Super Thursday’ when the MPC will reveal if they are hiking or not, details and the increasingly important Quarterly Inflation Report.

The Australian Dollar again looks vulnerable, facing the Fed, BoE and EU CPI data. The potential for USD gains next week may offer AUD/USD a break out of persistent consolidation.

The Fed interest rate decision on August 1 may influence the near-term outlook for USD/JPY as the central bank appears to be on track to implement higher borrowing-costs.

Sentiment surrounding the Canadian Dollar has been somewhat positive with NAFTA concerns easing, while next week’s key risk event will come in the form of the GDP report for May.

The Chinese Yuan lost against the U.S. Dollar for the seventh week. Looking forward, domestic economic difficulties and the ongoing trade war could continue to challenge the country and its currency.

Next week will be a busy one, with several major data releases and CB meetings taking place; markets will look to try to maintain its footing towards higher prices.

Gold prices finally found some semblance of support at the 50% marker of the 2014-2016 major move. But with a heavy batch of headline risk on the docket for next week, can price action hold the line? 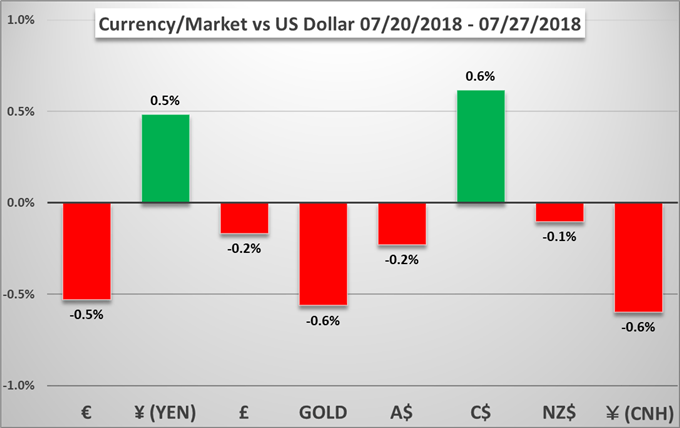