Financial markets preoccupied with the direction of Fed monetary policy will have to make room for rate decisions form the RBNZ and the BOE in the week ahead.

US Dollar Forecast: US Dollar Has Scope to Extend Rally on CPI Data, Powell Speech

The US Dollar has scope to continue building higher after enjoying the most aggressive three-week rally in nearly two years against its major currency counterparts.

The Euro correction has continued, and EUR/USD is testing below the vaulted 1.2000 level. As the economic backdrop in Europe continues to slow, the possibility of further Euro losses remain.

GBP fails to find reprieve after another run of uninspiring data points. Focus now turns to the Bank of England Quarterly Inflation Report.

The Japanese Yen could rise if uncertainty over the Iran deal hurts sentiment and boosts anti-risk assets. Other domestic and external event risks could once again swing the currency.

The Chinese Yuan may face a mixed impact from the unsolved US-China trade discrepancies and a reset in China-Japan ties.

Jitters surrounding the coming May 12 deadline for US President Trump to abandon Iran accord has supported the price of Crude despite record US production.

The near-term outlook for the DAX remains tilted to the topside, while the S&P 500 looks poised for a breakout amid the narrowing threat for a global trade war. 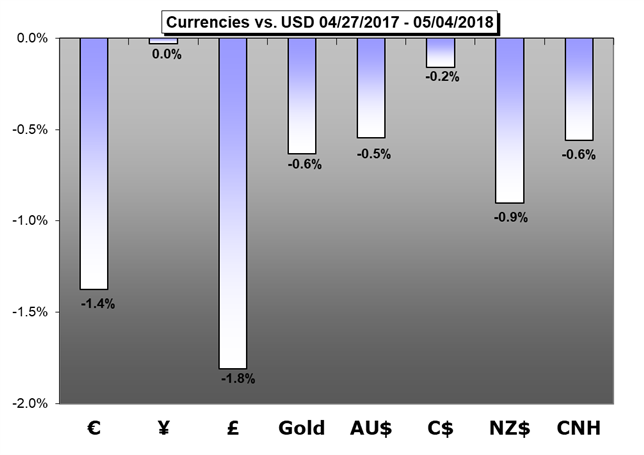