Weekly Forecast: A Crowded Field with Fed, BoE, BoJ and NFPs Ahead

The economic docket is packed with high profile market-moving event risk through the coming week. A key theme to emerge from this run will be monetary policy with the Fed, BoE and BoJ all on tap. The question is whether this packed schedule will translate into more productive volatility.

The US Dollar is posed to continue upward after surging to a three-month high but stalled progress on tax cuts and President Trump’s Fed Chair pick may emerge as roadblocks.

The ECB’s decision to taper their QE program and extend it for a longer period of time than anticipated made one thing clear to markets: interest rate hikes aren’t coming to the Euro-Zone until at least 2019.

There’s little doubt that the Bank of England will double the UK Bank Rate to 0.5% on ‘Super Thursday’ but the British Pound could fall afterwards.

The Japanese Yen showed strength after last week’s election-driven weakness. With the Bank of Japan on the docket ahead of the Fed, might the bank be able to provide another push of weakness into the Yen?

The Australian Dollar got an unexpected thump last week from some feeble inflation figures, but its pounding may have been a little overdone.

The FOMC rate decision along with a fresh batch of BoC rhetoric may fuel the near-term advance in USD/CAD as Chair Yellen and Co. appear to on course to deliver a December rate-hike.

The New Zealand dollar has fallen sharply since September’s elections and has retraced all of this year’s rally on a combination of political uncertainty and a stronger US dollar complex.

China’s new Party leaders have revised the economic expansion target, choosing quality over quantity. This could have impacted Yuan’s long-term trend. In the short term, Trump’s talk on trade before his China trip could drive Yuan moves.

Crude Oil bounced between fundamental drivers that continue to encourage Bulls and has led to a swelling in Bullish market positions.

The week ahead is a busy one, with the FOMC on Wednesday and BoE meeting on Thursday; markets will look to extend their recent runs as one month ends and a new one begins.

Gold has continued to hold above technical support with all eyes now fixated on the FOMC next week. Here are the updated targets & invalidation levels that matter. 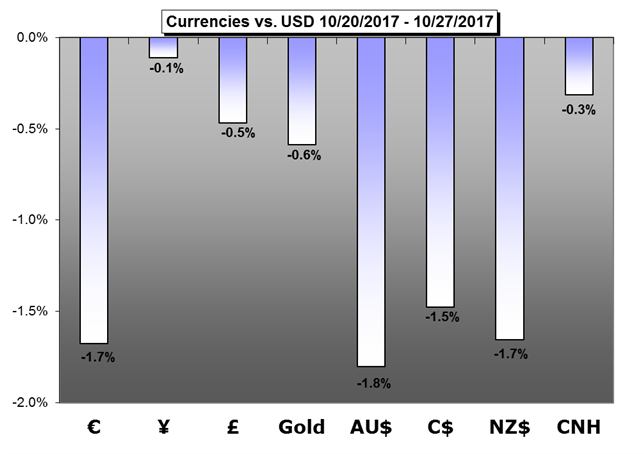