US Dollar Forecast: US Dollar Aims to Extend Advance But Politics Threaten Progress

The US Dollar aims to build on recent gains as rising inflation feeds Fed rate hike speculation but politics threaten to spoil the markets’ mood once more.

For the second week in a row, a quiet economic calendar leaves the Euro without significant drivers. Generally, the focus remains on the run-up to the October 26 European Central Bank policy meeting.

The British Pound looks set to slide further in the days ahead on political concerns, the Brexit impasse and weak data. However, it’s also due for a correction, which could come at any time.

USD/JPY appears to be on course to test the July-high (114.50) as it clears the monthly opening range ahead of the Federal Open Market Committee (FOMC) Minutes.

The Australian Dollar had a tough week last week and, while the coming one may be kinder, there’s little reason to suspect any change in the current AUD/USD downtrend.

With market focus turning to China’s 19th Party Congress to be held in less than two weeks, Yuan’s losses against the Dollar may soon find relief.

In the week ahead, we have FOMC minutes in the U.S. on Wednesday; calendar light in Germany and the UK, indices to be impacted by their respective currencies and general risk-trends.

Gold is down for the fourth consecutive week with an NFP inspired rally offering a reprieve on Friday. Here are the updated targets & invalidation levels that matter.

Oil prices fell back below the vaulted psychological level of $50 as worries about Tropical Storm Nate began to get priced-in. Meanwhile, a key long-term trend-line continues to help shape resistance in WTI. 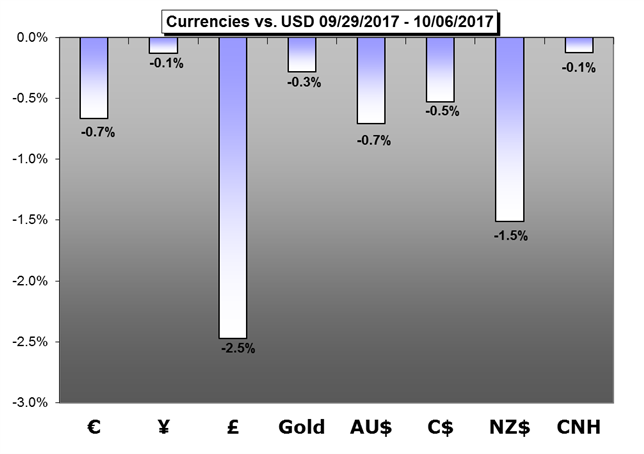