The FOMC policy announcement leads a loaded docket of top-tier event risk including rate decisions from the BOE, SNB and BOJ as well as New Zealand GDP and Australian jobs data.

US Dollar Forecast: US Dollar May Rise on Fed Optimism, European Political Woes

The US Dollar may extend last week’s late rally as the Federal Reserve sticks to its 2017 rate hike path aspirations while political jitters send capital fleeing from Europe.

Euro Forecast: ECB Cuts Inflation Forecasts, but is it Enough to Quell the Euro’s Advance?

The European Central Bank made another dovish attempt at this week’s ECB meeting, but a lack of follow-thru selling suggests that the bullish trend may not yet be done.

After dramatically underperforming expectations, concern over a weak mandate will plague the Conservatives and stir speculation over a “hard Brexit” outcome, neither of which are good for the British Pound.

The Australian Dollar could be doomed to struggle with a lack of obvious positives in a trading week which will open with AUD/USD already at quite-elevated levels.

The New Zealand dollar’s recent rally may be cooling off ahead of first quarter GDP figures on Wednesday.

USD/CAD has been climbing gently since May 15, lifted by a combination of weak oil prices and the realization that the BOC is still in no mood to increase rates soon.

Next week, event risks from both the U.S. and China will be major drivers for the Dollar/Yuan rate.

Gold snapped a three week winning streak with prices reversing back below key slope resistance. Here are the updated targets & invalidation levels that matter into FOMC.

Crude Oil Forecast: Future's Spread Brings Fear That OPEC Did Not Accomplish Much

Bearish sentiment in the Oil market is rising as the US oil production is doing the same, which limits the best intentions and efforts of OPEC’s extended cut.

The week ahead holds the FOMC and BoE for the S&P 500 and FTSE 100, respectively; DAX looks to try and steady itself, taking cues from general risk trends. 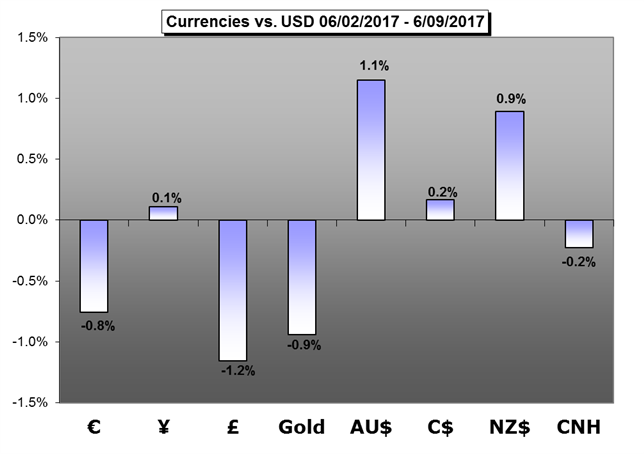