Financial markets were consumed with shaky US politics last week. Upcoming news-flow from Washington DC may be no less potent even as top-tier economic event risk returns.

US Dollar Forecast: US Dollar May Rebound as the Fed Reasserts Rate Hike Intentions

The US Dollar may rebound after suffering steep losses amid political instability fears as Fed officials reassert their intent to press on with interest rate hikes.

A light economic calendar this week should keep the Euro in the market’s favor, particularly against the Australian, New Zealand, and US Dollars, which it has fared quite well against in recent weeks amid rising political pressure out of the United States and greater selling pressure in the commodity complex.

USD/JPY witnessed its first decline in six weeks this past week. hile there looms a range of both domestic and global event risk in the coming week, the focus is likely to default to general evaluations of sentiment.

Canadian Dollar Forecast: Which Way Will the BoC Jump?

It’s still widely expected that the central bank’s next move will be an increase in its 0.50% key policy rate towards the end of this year but most of the recent evidence has pointed the other way.

The Australian Dollar seems mired at the moment, with the US Dollar driving. This week probably won’t see much change there as the data schedule is thin

New Zealand Dollar Forecast: The Selling Pressure is Off For Now

The outlook for the Kiwi dollar remains negative but current levels don’t appeal for the longer-term bears.

One development from this past week that pulled the yellow metal higher was the Fed interest rate expectations slowing down into the remainder of 2017.

A few moves from Chinese regulators this week may have added confidence into Yuan rates.

Crude Oil Forecast: All Eyes on Vienna As OPEC Looks To Lock In Extension

Next week, OPEC will meet in Vienna and is expected to extend production cuts from major oil producers through March 2018 in attempt to balance global oil supply with demand.

Global markets will attempt to repair damage in the week ahead, but if key levels aren’t broken another dive lower could develop. 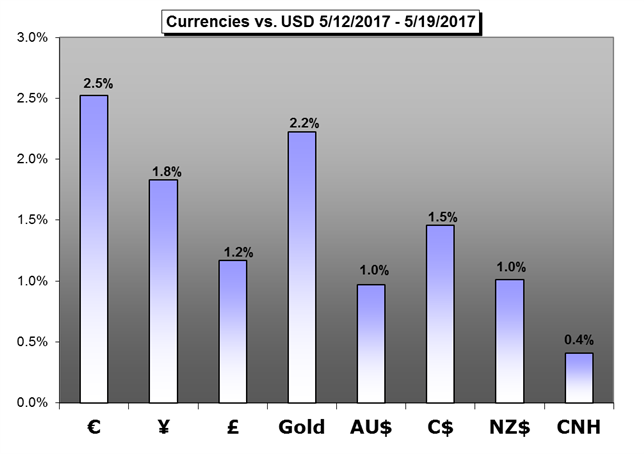 See how retail traders are positioning in the majors using IG Client Sentiment readings on the sentiment page.