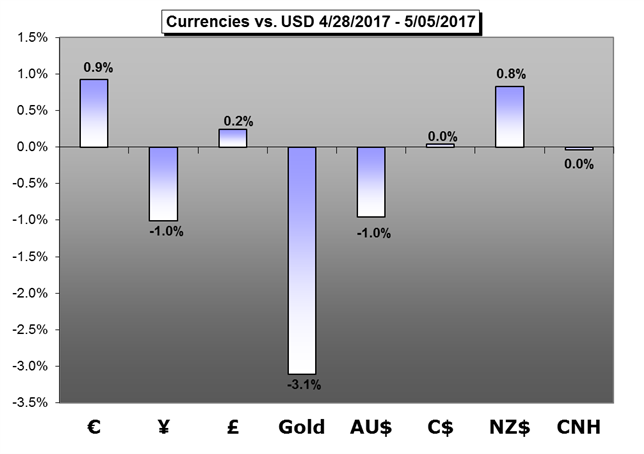 Weekly Trading Forecast: Spotlight Turns Away from the US

The French presidential election runoff, rate calls in the UK and New Zealand as well as EU and G7 meetings demand attention as the spotlight turns away from the US.

An all-but-certain Fed rate path in the near term may see the US Dollar looking outward for direction cues. Ample international event risk offers no shortage of possible drivers.

Polls suggest that Emmanuel Macron will be the next president of France by the time FX markets open up on Sunday in New York, which should lead to another gap open higher in EUR-crosses.

Japanese Yen: BoJ Optimistic but Inflation Still Subdued: Taper Not Yet a Topic of Concern

Yen weakness was a pervasive theme across FX markets this week, as the currency dropped every day against the Euroand four out of five days against both the British Pound and the U.S. Dollar

Friday’s news that Canadian employment rose by a mere 3,200 in April, well below both expectations of a 10,000 increase and the previous month’s 19,400 advance, was deeply disappointing.

The BoE’s ‘Super Thursday’ event along with another week of Fed rhetoric may shake up the relief rally in GBP/USD amid the deviating paths for monetary policy.

The Australian Dollar would probably be doing a lot better if domestic news were all that mattered. It isn’t, sadly for the bulls. Interest-rate differentials and commodity prices matter too.

After hitting a 10-month low on April 28, the New Zealand Dollar enjoyed a rare but brief fillip this this week, first on a better-than-expected jobs report, then on news that inflation expectations had risen.

Gold prices fell for the third consecutive week with the precious metal down more than 3.15% to trade at 1227 ahead of the New York close on Friday.

The Chinese Yuan extended losses against the U.S. Dollar for the third consecutive week in the offshore market, although it has not yet broken the key resistance level of 6.8980.

Crude Oil was a big theme of the reflation trade that favored proof of pending economic growth as commodity prices pushed higher in Q4/Q1.

The election. Will we see a Macron victory as expected or a surprise win by Le Pen? In the likely event we see Macron become the next president of France, a gap higher in the CAC is a reasonable expectation