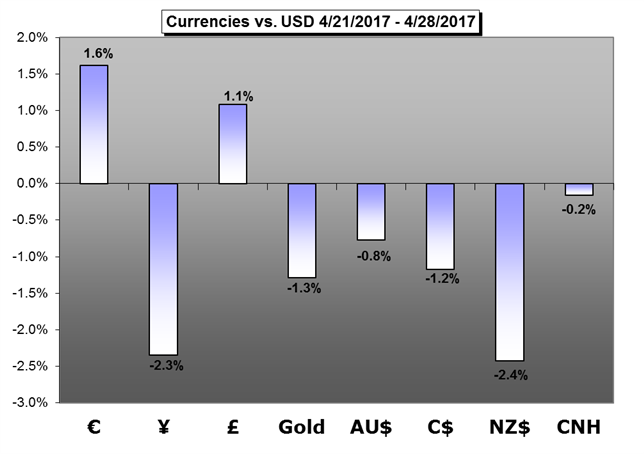 Weekly Trading Forecast: Fed Policy Path Back in the Spotlight

Financial markets' cheery mood after the first round of France's presidential election will be tested as Fed decision-makers issue a verdict on the world's largest economy.

US Dollar Forecast: US Dollar at Risk as Fed Decision-Makers Reconvene

The road ahead may prove challenging for the US Dollar after it enjoyed its best week yet in 2017 as all eyes turn to the Federal Reserve monetary policy announcement.

To no one’s surprise, the European Central Bank sat on its hands at its last meeting as it was a meeting without new staff economic projections. Meanwhile, markets are gearing up for the final round of the French presidential elections on May 7.

As predicted here a week ago, the Japanese Yen declined last week and there’s little sign yet that the trend is about to change.

The Canadian dollar is the worst performing G10 currency in April, with USDCAD at its highest since February 22 2016.

The Australian Dollar has been weakening against its US counterpart since mid-March. That trend will probably endure this week, but may not worsen.

Bullion looks to close the month higher by nearly 1.4% as weakness in the greenback and renewed geo-political tensions fueled demand.

The USD/CNH continued to consolidate in a range this week; it failed to set a lower low or a higher high. Looking forward, event risks could add volatility to the pair.

Equities Forecast: S&P 500 Has Eyes for New Highs, DAX Too

Looking ahead, Monday may be relatively quiet with major financial centers in Europe closed for holiday.