Financial markets are set for a volatile week as first round of the French presidential election, a White House tax reform proposal and first-quarter US GDP data looms ahead.

The US Dollar looks set for a volatile week as the first round of the French presidential election, a White House tax reform proposal and first-quarter GDP data loom ahead.

Euro Forecast: Get Ready for Gap Open in EUR-Crosses Thanks to French Election

With French election results coming out before markets open up on Sunday, expect a sizeable gap in the EUR-crosses (results due out at 14:00 EDT; FX markets open at 17:00 EDT).

Speaking in Washington Friday, Bank of Japan Governor Haruhiko Kuroda had a simple message: the current pace of quantitative and qualitative easing is set to continue indefinitely

The Canadian dollar looks likely to test its recent low against the USD, opening the way for further falls. Price action this week had been driven by a slightly weaker oil complex, pushing the Loonie lower

British Pound Forecast: Are Early Elections Really a ’Game-Changer’ for the British Pound?

The big news out of the U.K. this week came on Tuesday morning from Prime Minister Theresa May, in which she surprised the world by announcing that general elections will be held early, on June the 8th.

The Australian Dollar could find itself under pressure again in the coming week. Its home economy is doing quite well, but the international picture looks less bullish.

Markets will start out the week with the French presidential election on their minds, but to what impact it will have on U.S. markets likely depends on the magnitude to which Europe moves

Oil Forecast: Oil’s Near-6% Drop May Pave The Path For Improving Fundamentals

You wouldn’t know it by looking at the charts, but there was more encouraging news from OPEC as well as a US Inventory Draw on Wednesday per the EIA weekly release. 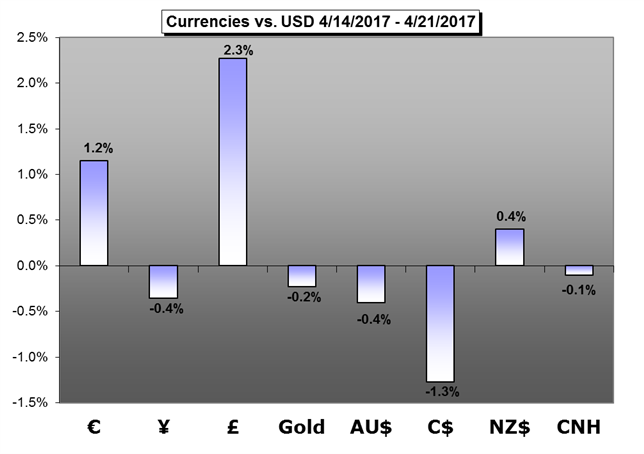