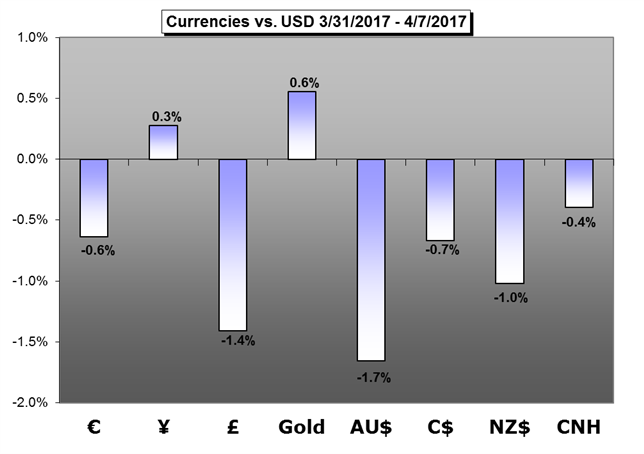 Geopolitics threaten to derail financial markets yet again as investors reckon with the aftermath of an unexpected US airstrike against Syria.

The US Dollar has scope to continue building on a two-week recovery as Fed policy bets turn favorable but geopolitical jitters complicate the outlook.

With the ECB pushing back against higher sovereign European yields (thus causing the US-German yield spread to widen out again), the Euro is under a fair bit of pressure. Amid a fairly quiet calendar, traders will keep an eye on yield spreads and developments leading into the April 23 French elections.

The British Pound may face further losses in the week ahead as the economic docket is anticipated to show a downtick in U.K. price & wage growth.

The Australian Dollar has been knocked lower by US missile strikes against Syria, and seems likely to remain pressured if this situation escalates.

What happened over the past 24 hours have led to the most dramatic moves in the USD/CNH this week. U.S. striking Syria sent the pair higher as investors sought for safe haven; a disappointing Non-Farm Payroll print led to selling in the Dollar, though it was quickly eased and reversed.

US crude oil continues its push higher, hitting a one-month high, as traders fear that supply may be affected after the recent US air strikes on Syria.