A meeting between US and Chinese Presidents Donald Trump and Xi Jinping may overshadow a steady stream of top-tier economic news in the week ahead.

The US Dollar is trying to return to more “normal”, data-driven trade but a meeting between US President Trump and his Chinese counterpart Xi Jinping may complicate matters.

Euro Forecast: ECB Pushes Back Against Euro Strength; French Elections Around the Corner

Reports have emerged that the ECB is none too happy with how markets have responded to their March policy meeting, suggesting that the end of loose monetary policy is further away than previously thought. Market participants will keep an eye fixated on France with elections in three weeks.

Despite all the anticipation surrounding ‘Brexit,’ the British Pound is little changed even as the U.K. officially triggers Article 50 of the Lisbon Treaty.

After a rather consistent run of weakness against the Greenback in the month and a half after the start of the ‘Trump Bump’, USD/JPY combined sideways price action with a slight bearish bias to continue the retracement-lower that started in the first week of this year.

The Australian Dollar remains quite close to its 2017 peaks against its US counterpart, but it’s hard to see what might make it break out either way this week, assuming all goes as forecast.

The offshore Yuan continued to consolidate against the U.S. Dollar this week and remained stronger than PBOC’s guided levels.

Last week, gold prices rallied for a second consecutive week with the metal up more than 1.56% to amid continued weakness in the Greenback, owing to increasing hesitancy over the so-called ‘Trump trade’

The beginning of Q2 is setting up to be important for Oil traders to watch given what’s happening behind the price, which could determine if Crude Oil turns lower or much higher over Q2. 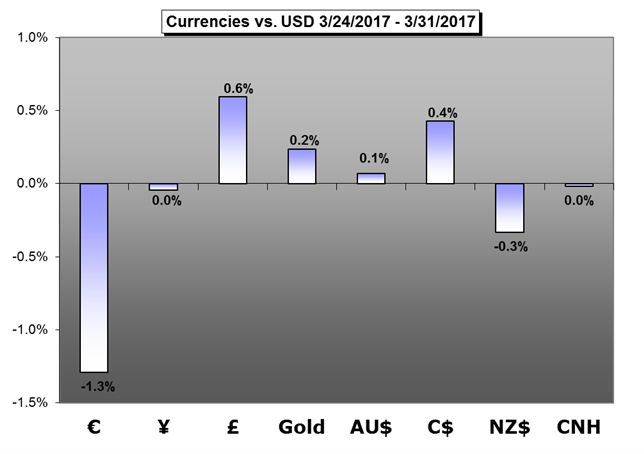