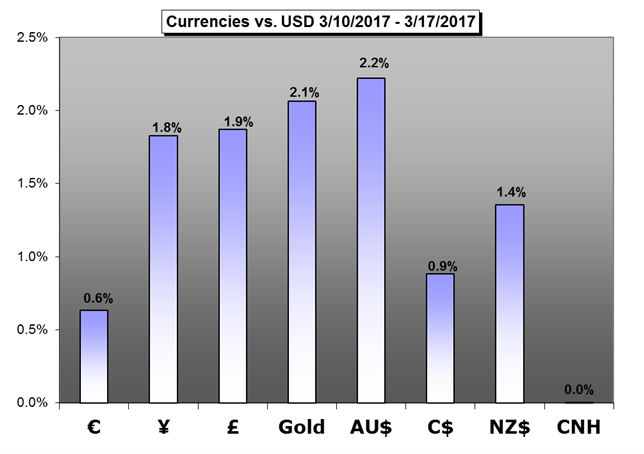 Weekly Trading Forecast: All Eyes Remain on the Federal Reserve

Financial markets are likely to remain fixated on US monetary policy as a lull in top-tier data puts the spotlight on a busy Fed-speak calendar in the week ahead.

The US Dollar may recover after suffering its largest weekly loss in nearly five months as Fed officials reiterate their intention to continue raising rates this year.

Between the Dutch elections and a Federal Reserve that refused to endorse a faster pace of policy tightening, EUR/USD had both major events break in its favor this past week. Going forward, markets will give more and more weight to the French elections, which are looking like less and less of a risk for the Euro.

British Pound Forecast: CPI the Focal Point as a Shift Begins to Emerge Within the BoE

The Bank of England hosted an interesting rate decision this week. No changes were made, and no rates were changed; but what was different was a dissenting vote within the BoE.

The Federal Open Market Committee’s (FOMC) March rate-hike failed to prop up the USD/JPY exchange rate, and the pair appears to be working its way back towards the 2017-low (111.59) as the central bank tames interest-rate expectations.

A week of relatively scanty economic data on both sides of the Pacific could leave AUD/USD sitting on its gains, but short of reasons to build on them.

The past fortnight could have been a terrible one for the Canadian Dollar, with the price of benchmark West Texas Intermediate crude dropping from above $53 per barrel on March 7 to below $49 now.

The Reserve Bank of New Zealand’s decision in February sent the New Zealand Dollar on a four week decline across the board. It’s highly unlikely that RBNZ Governor Graeme Wheeler will alter his recently dovish tone, especially after Q4’16 GDP data came in at a slower pace than anticipated.

Chinese Yuan Forecast: Yuan at a Crossroads, Risk Trends Next?

The USD/CNH failed to hold a sustainable break below 6.8560 (December low), nor to climb above 6.9088 (61.8% retracement of the January drop). Looking forward, the economic calendar is light.

Gold prices are higher this week with the precious metal up more than 2% to trade at 1229 ahead of the New York close on Friday.

The Oil market appears to be wholly focused right now on whether or not the OPEC accord to reduce supply so that price stockpiles come in line with the 5-year average will be extended past June.

Equities Forecast: Watch the DAX, It Could Be on the Verge of a Big Move

Last week was a busy one, with the FOMC, BoJ, and BoE all holding monetary policy meetings, however; looking ahead to next week we are left searching for any major catalysts for stocks on the economic calendar. On that note, markets are likely to be technically-driven.