Expectations Blur with Fed, BoE and BoJ Rate Decisions Ahead

Monetary policy isn’t the straightforward fundamental driver it once was. This past week, the Dollar struggled despite strong NFPs and a certainty of a FOMC hike while the Euro rallied after reports the ECB discussed the future of hikes. Be prepared for unusual response to the Fed, BoE, BoJ and even SNB decisions ahead.

Despite a remarkably robust set of economic data – that included strong February payrolls – and a rise in rate expectations to the point of certainty that the Fed will hike Wednesday, the Dollar lost ground this past week.

With the European Central Bank feeling more optimistic in the region’s progress and the odds of the National Front’s Marine Le Pen winning the French presidential election fading (thanks to a resurgent Emmanuel Macron), obstacles to further Euro strength appear to be fading quickly.

The British Pound closed out the week dropping for a sixth day versus the Euro, its worse run since August, and had a second straight week of declines against the Greenback. This coming week, the BOE is unlikely to back away from its ultra-accommodative policy stance.

USD/JPY stands at risk of facing increased volatility over the coming week as the Federal Open Market Committee (FOMC) is widely expected to deliver a March rate-hike, while the Bank of Japan (BoJ) continues to pursue its Quantitative/Qualitative Easing (QQE) Program with Yield-Curve Control.

The Australian Dollar seems likely to continue lower if US interest rates rise this week, but the prevalent idea that Australian rates won’t rise this year faces new challenges.

For now, there are few good things to say about the New Zealand Dollar, the worst performing major currency in March thus far.

USD/CAD has neared the top of a six-month range, and beyond the usual relationship the Canadian Dollar maintains will oil, it is now at the mercy of US trade negotiations under the Trump administration.

The USD/CNH fell to a major support zone around 6.8845 on Friday after the non-farm payroll report failed to inspire a bullish-run in the Dollar. Earlier in the Asian session, PBOC’s officials’ talks on exchange rates added strength to the Yuan as well

Gold prices fell for the second consecutive week with the precious metal down 2.67% to trade at 1201 ahead of the New York close on Friday. Bullion is down more than 5% off the yearly high and has been fueled by expectations for higher borrowing costs from the Fed.

Global equity indices ended neutral to slightly off for the week. The ECB met on Thursday and held on their path for monetary policy as expected, with Mario Draghi saying nothing to spark any significant volatility in European markets.

Crude oil prices have broken to the downside over the past few days, finally reflecting the ongoing imbalance between plentiful supply and limited demand. 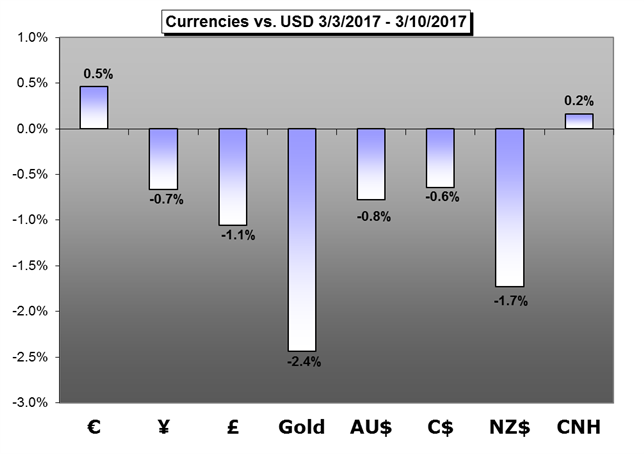