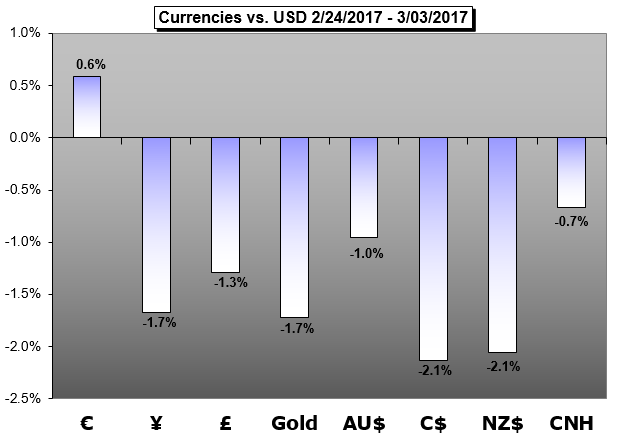 How Much More Run for Record US Equities, Dollar on Fed Certainty?

US equities have charged to record highs while the Dollar has extended its restrained but steady approach amid certainty of a March Fed hike. These will be convictions difficult to sustain amid NFPs, trade policy debate and Brexit votes next week.

The Dollar’s posture heading into the new week is bullish on the back of a remarkably decisive outlook for a Fed hike at the next official FOMC meeting.

The recent tightening in French-German yield spreads indicates market anxiety over a Le Pen victory is falling; the ECB probably won’t do anything noteworthy this week.

USD/JPY may continue to retrace the decline from earlier this year as a growing number of Fed officials highlight a hawkish outlook for monetary policy, with U.S. Non-Farm Payrolls (NFP) projected to increase another 190K in February.

This was a brutal week for the British Pound, as the currency put in five consecutive days of losses against the U.S. Dollar to tally a total move of -2.8% from last Friday’s highs down to this Friday’s low.

The USD/CNH broke above a key level of resistance at 6.8845 on Friday, driven by the Dollar advance following an increased odds in Fed rate hike.

Gold Forecast: Gold Prices Remain in Bull Trend Despite 2nd Down Week in 10

For only the second time in ten weeks, gold prices finished the week lower. The biggest development of the past week driving gold lower was the Fed’s interest rate expectations.

The New Zealand Dollar continues to weaken after a shift in RBNZ policy last month.

At the start of last week markets were quiet until U.S. President Donald Trump gave a speech to congress Tuesday evening, providing stocks with a shot in the arm on Wednesday.

The price of Oil has fallen the second most in percentage terms in 2017 over the last week, but price support continues to align with the Bulls.