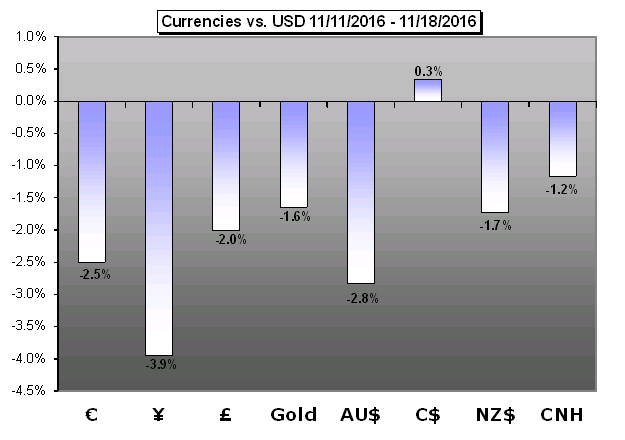 Weekly Trading Forecast: Does a Seasonal Liquidity Drain Benefit or Threaten the Markets?

The US Thanksgiving holiday week offers a historical drain on liquidity and boost in speculative reach. However, against the backdrop of rate speculation, protectionism and uneven risk trends; shallow markets may impose more risk than relief.

The Dollar’s performance these past weeks is undeniably extraordinary. Through this past Friday’s close, the ICE’s Dollar Index (DXY) notched 10 consecutive days of climb – the longest bull run since June 2013 – to reach highs not seen in over 13 years.

In the event that political risks in the Euro-Zone continue to build up, there is ample room for market participants to drive down the single currency in the short-term. Among futures traders, non-commercials are only holding 119.2K net-short short contracts through the week ended November 15, 2016. Relative to the all-time extreme set at the end of March 2015, when there were 226.6K net-short contracts held, bearishness towards the Euro isn’t that significant at present time.

The Japanese Yen plummeted for the second-consecutive week as the US Dollar surged to 13-year highs, and a continuation of the so-called US President Elect ‘Trump Rally’ could push it to further lows. A holiday-shortened week for North American markets will shift focus to Japan.

Recent price action casts a bearish outlook for GBP/USD as the recovery from the 2016-low (1.1905) appears to be losing momentum, and the British Pound may continue to give back the rebound following the October ‘flash crash’ should the Autumn Budget Statement highlight a weakened outlook for the U.K. economy.

The Australian Dollar accelerated downward as expected as financial markets continued to reckon with the implications of an on-coming economic policy pivot following the US presidential election. Traders are betting that grandiose fiscal stimulus championed by President-elect Trump will prove inflationary, pushing the Fed along a steeper rate hike path.

The New Zealand Dollar has performed in Binary fashion in the FX market. If you simply looked at the NZD/USD spot price, you would think the New Zealand economy was underperforming.

The Bank of Canada moving back into a dovish posture has been expected for a while now. As we came into 2016, the Canadian Dollar was mired in a continued descent; and when paired-up with what was an extremely strong U.S. Dollar on the back of hopes/thoughts/fears of a full four interest rate hikes from the Federal Reserve in 2016, this created a real quagmire of a situation for Canadian importers.

Both the onshore and offshore Yuan extended losses against the U.S. Dollar for the second consecutive week amid the Dollar strength: theUSD/CNHset record highs (record lows for the offshore Yuan) on a daily basis over the past five days

Gold prices fell for the second consecutive week with the precious metal down 1.5% to trade at 1209 ahead of the New York close on Friday. The losses come on the back of a massive sell-off last week that took prices to a seven month low.