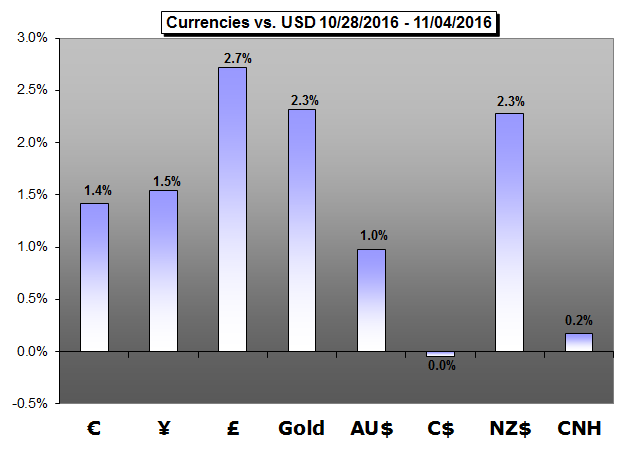 Whether you trade currencies, stocks, fixed income or any other range of assets; the focus is the same: the US Presidential Election this week.

US Dollar Forecast – A Risk Response is Clear, But How Does the Dollar React to Election?

There is little doubt that the US Presidential Election next week is the global market’s top event risk. The implications for risk trends is clear with the longest slide for the benchmark S&P 500 in 36 years (9-day) through Friday.

Euro Forecast - Let's Not Pretend Otherwise: Only One Thing Matters for EUR/USD This Week

EUR/USD has been moving steadily higher, but it has nothing to do with improved European economic data, higher inflation expectations, or receding Fed rate hike expectations. Instead, the only legitimate reason one can point to EUR/USD’s rally – and the decline in the US Dollar generally – is the risking political risk premium thanks to US elections.

The Bank of Japan has become known as having a penchant for surprises. On the night of Halloween in 2014, the bank announced that a portion of their QE efforts would be directed towards stock purchases via ETF’s (both domestic Japanese issues as well as international ETF’s), and this caught pretty much the entire world by surprise.

The British Pound surged on huge week for ongoing “Brexit” negotiations and a surprise shift in Bank of England interest rate policy.

The Australian Dollar continues tread water in a narrowing range below the 0.78 figure against its US counterpart despite a seemingly ample stock of trend-defining catalysts.

New Zealand Dollar Forecast - NZD: Is the RBNZ Approaching the End of its Easing-Cycle?

The Reserve Bank of New Zealand’s (RBNZ) last 2016 interest rate-decision on November 10 may heavily impact the near-term outlook for NZD/USD as Governor Graeme Wheeler and Co. are widely anticipated to cut the official cash rate to a fresh record-low of 1.75%.

The Chinese Yuan launched a recovery this week, after it lost against the U.S. Dollar for four consecutive weeks. The USD/CNH found resistance along the top side of a parallel extending off the August high.

Gold prices are decisively higher this week with the precious metal up more than 2.2% to trade at 1303 ahead of the New York close on Friday.