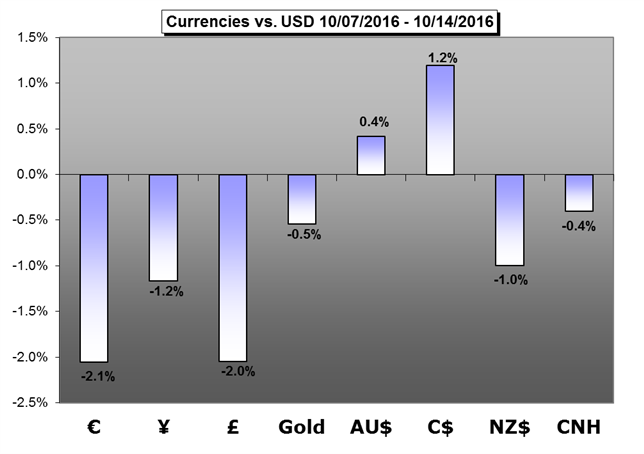 The convergence of event risk and themes is stirring deeper trends in the global markets. Critical themes ahead to watch include Fed timing, Brexit fears, China's health and an ECB turning point

US Dollar Forecast - Dollar Run Not As Robust as Bulls Think, Needs Euro or Risk Stumble

How strong is the Dollar? This past week, the DXY Dollar Index posted its most robust weekly advance (1.44 percent) in nearly eight months. Yet, there is a trade-weighted bias in this this measure that gives considerable deference to the EUR/USD, GBP/USDand USD/JPY(descending in that order).

EUR/USD recently exited its symmetrical triangle to the downside, no thanks to investors pricing in more action from the ECB. Instead, a barrage of small issues have created the perfect storm for EUR/USD weakness in the short-term.

Key developments coming out of the U.S. & U.K. may push GBP/USD out of a narrowing range even though the Federal Open Market Committee (FOMC) remains in no rush to raise the benchmark interest rate, while the Bank of England (BoE) appears to be altering its monetary policy outlook following the British Pound‘flash crash.’

Australian Dollar Forecast –Changing of the Guard at the RBA: Getting to Know Dr. Phillip Lowe

The most recent Reserve Bank of Australia rate decision at the beginning of October was the first to be led by newly-installed RBA Governor, Dr. Phillip Lowe; ending a run of ten years in which the bank was led by his predecessor, Mr. Glenn Stevens.

The Canadian Dollar will look toward the Bank of Canada Rate Announcement and subsequent statement to see whether or not there are signs of encouragement in the Canadian economy.

Gold prices were virtually unchanged on the week with the previous metal down just 0.05% to trade at 1256 ahead of the New York close on Friday. The recent range-bound price actions comes amid broader volatility in U.S. Equity markets with all three major indices set to close lower on the week.