Top fundamental themes - risk trends, monetary policy influence, etc - have passed another week without the resolve and conviction of a true trend. But, abrupt and provocative moves from the Dollar, Yen and Pound may indicate tension has hit the boiling point.

US Dollar Forecast - NFPs Stall Dollar’s Run, Where Will the Drive Come This Week?

The Dollar enjoyed an impressive run this past week despite a grounded view of risk trends and little progress pushing forward expectations of a 2016 Fed hike. The 1.3 percent climb for the ICE Dollar Index was the largest since the Brexit vote drove shaken investors to the warm embrace of the world’s primary reserve currency.

Amid a relatively quiet economic calendar, the Euro has failed to make any significant progress. Overall, it seems that the Euro isn’t in control of its own destiny in the short-term.

The British Pound ‘flash crash’ is likely to gain increased attention as a slew of Bank of England (BoE) officials are scheduled to speak over the days ahead, but the abrupt depreciation in the sterling may encourage the central bank to endorse a wait-and-see approach for monetary policy as it heightens the risk of overshooting the 2% target for inflation.

The offshore Yuan (USD/CNH) broke the psychological level of 6.70 in the first trading week as a global reserve currency, while Chinese onshore markets were closed and no Yuan fix was issued by the PBOC.

Gold prices plummeted this week with the precious metal down nearly 5% to trade at 1252 ahead of the New York close on Friday. The decline marks the largest weekly loss since October of 2014 and come alongside a broad rally in the U.S. Dollar with the DXY climbing more than 1.3% this week. 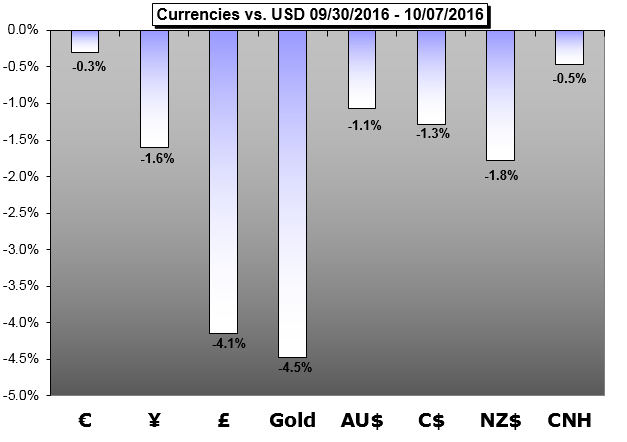