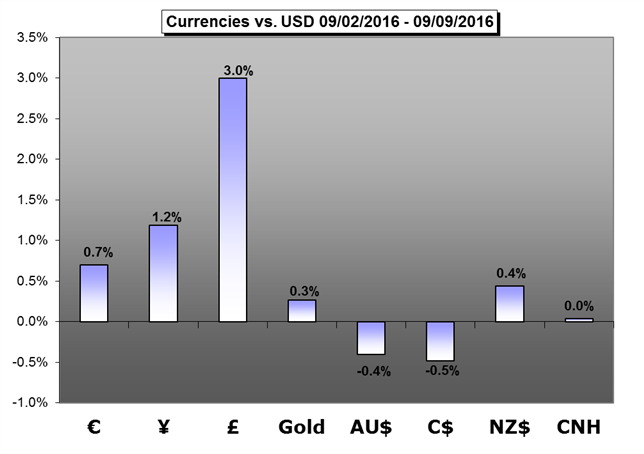 A tumble in capital markets and rise in the Dollar to close this past week has set traders' fear and speculation alight. Is a seismic market move underway or is this nervous energy after a long bout of quiet?

US Dollar Forecast – What Kind of Dollar Rally Arises from ’Hike of Necessity’, Full Risk Off?

The Dollar – like most other markets’ benchmarks – has caught a glimpse of volatility after the seasonal transition, but still trades in a broader range. Participation and conviction are still absolute necessities to reviving a trend - whether for the Greenback or investor sentiment, bullish or bearish.

ECB President Mario Draghi made clear at the press conference on Thursday that a number of steps will be taken to determine if it’s necessary to tweak the QE program. Newsflash: it’s already necessary. Mark your calendar for a rate cut by December.

The week ended on a sour note for high-yielding currencies like Emerging Markets & the New Zealand Dollar. Mid-Week, the New Zealand Dollar got a nice bump thanks to stronger China Data. The Chinese data was enough to push NZDUSD to a 2016 high of 0.7488. However, the end of the week led to a

The volatility in Yuan rates elevated this week: the USD/CNH broke the support of 6.6832 that was held last week and found new support around 6.6650. In terms of the upper band, the pair rose towards the psychological level of 6.7000 once again on Friday.

Gold prices softer this week with the precious metal off 0.17% to trade at 1318 ahead of the New York close on Friday. Heading into the holiday weekend the near-term risk remains for further losses before making a more significant low in early September trade.