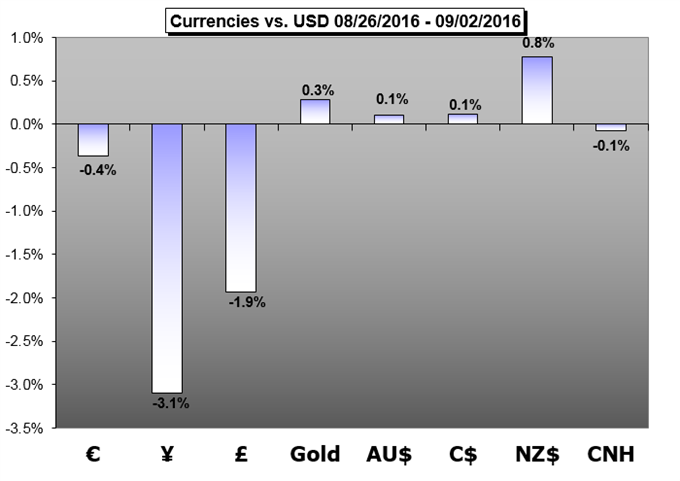 All Eyes on Europe for next Big Currency Moves

A volatile week of US economic data did little to answer key questions for FX markets. Attention turns to Europe for the next big market moves.

Despite a middling August US payrolls report, Fed rate hike odds for September and December barely moved. No surprise then that the US Dollar remains resilient.

Euro Forecast – All Eyes on ECB: Extension of QE, or just More Wait-and-See?

The European economy continues to flail, that much can be widely agreed upon without further debate. Unemployment throughout the bloc remains stubbornly above the 10% threshold, and this week, more evidence contributed to the mounting case that the March ‘bazooka’ of stimulus triggered by the ECB has yet to show any additional signs of promise for the European economy.

The near-term series of higher highs & lows inAUD/USDmay gather pace next week as the Reserve Bank of Australia (RBA) is widely anticipated to retain its current policy in September, while the regions 2Q Gross Domestic Product (GDP) report is projected to highlight the fastest pace of growth since 2012.

The Japanese Yen finished last week lower against the majority of G10 FX as traders anticipate the dual Central Bank meeting of Federal Reserve and the BoJ on September.

The USD/CNH held above 6.6832 as support despite a weaker-than-expected U.S. August Non-Farm Payrolls print released on Friday. In terms of the upper band, the pair touched 6.7026 on Monday, the highest level in over a month, but failed to hold above the key resistance of 6.7000.

Gold prices softer this week with the precious metal off 0.17% to trade at 1318 ahead of the New York close on Friday.