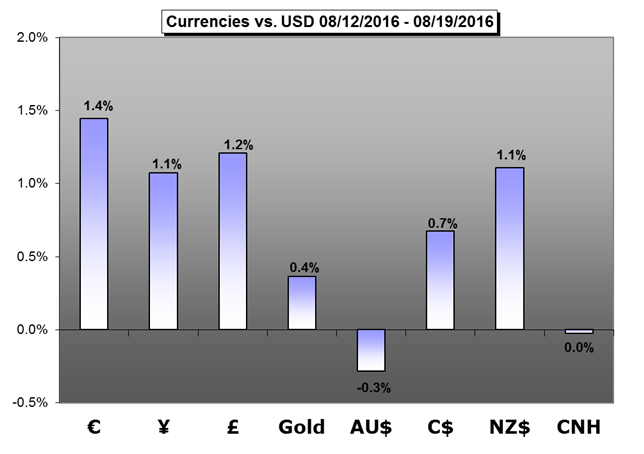 Extremely thin trading for the capital markets is sidelining FX trends as well. Volatility in the majors continues to outpace its financial peers, but can Janet Yellen's remarks at the Jackson Hole Symposium leverage monetary policy speculation and turn activity to conviction and trend?

US Dollar Forecast – Dollar Looks to Yellen to Turn Volatility into Trend, Will She Acquiesce?

Indecision is a universal market theme. And, the Dollar has not escaped the sedation. A confluence of conviction and participation is proving exceptionally difficult to muster due to the growing sense of skepticism in fundamental value as well as the seasonal lull that we expect through the ‘Summer doldrums’.

The Euro surged to multi-month highs versus the US Dollar despite a fairly uneventful week for both Europe and the US.

Last week we looked at the strength in the Yen as markets continued to price-out QE hopes after the Bank of Japan failed to deliver at their July meeting. But as we’ve been noting, just because the BoJ didn’t deliver on expectations in July, this doesn’t mean that the bank is yet ‘done.’

Chinese Yuan Forecast – Yuan Continues to Consolidate Ahead of G-20

Gold prices were relatively flat this week with the precious metal up just 0.57% to trade at 1343 ahead of the New York close on Friday.