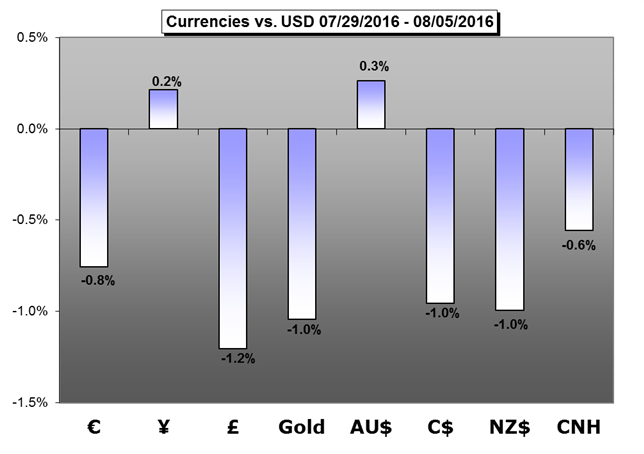 The cumulative pressure between BoJ and BoE stimulus upgrades along with a strong US NFPs these past weeks has revived risk appetite and monetary policy advantages. Yet, can these themes survive slipping confidence?

The Dollar recovered from an initial slip this past week to close the period in the green. However, the fundamental cost to lift the Greenback was remarkably high. It will be difficult for the currency to keep buoyant – much less maintain the pace of the rebound – heading into the coming week.

Euro Forecast - EUR/USD Ebbs and Flows, but Not Due to Euro Influences

EUR/USD spilled lower into the end of the week after another strong US jobs report, but over the immediate future, there are few reasons to expect significant price action as it were in the preceding weeks.

GBP/USD stands at risk of giving back the rebound from the July low (1.2788) as the Bank of England (BoE) reverts back to its easing cycle, while positive data prints coming out of the U.S. economy boosts bets for at 2016 Fed rate-hike.

The Japanese Yen finished the week almost exactly where it began, but notable financial market volatility meant that USD/JPY price action was anything but straightforward. Yen volatility will likely continue on a highly-anticipated communique from the Bank of Japan in the days ahead, and indeed traders should exercise caution amid choppy price action in the USD/JPY.

The Australian Dollar touched its highest level against the U.S. Dollar on Thursday at 0.76632 since July 15 before the Statement of Monetary Policy provided little forward guidance that caused traders to take their profits.

Last week ended with another bump higher in Gold prices as an abysmal U.S. GDP print brought to question the prospect of any near-term rate hikes out of the Federal Reserve.