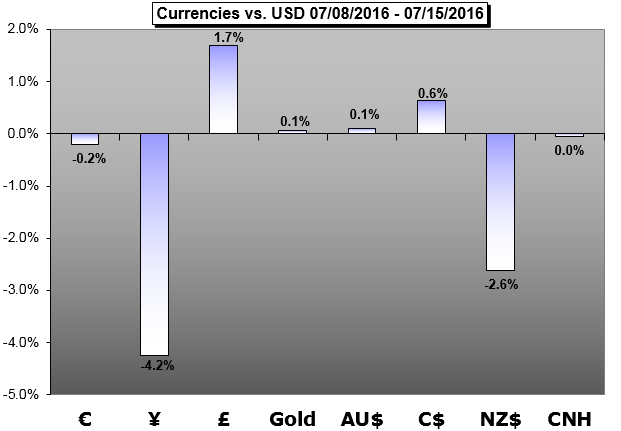 There were two prominent and dichotomous trends this past week. One the one hand, the S&P 500 extended a run to record highs. On the other, EUR/USD held a tight range. Can this contrast in direction and activity level hold?

The British Pound strengthened for only the second week of the past seven as a key surprise out of the Bank of England and positive political developments eased financial market tensions.

European Union leaders have some tough decisions ahead of them with respect to saving the Italian banking system, and implicitly, preventing a European financial crisis on the scale of US-borne 2008 crisis.

USD/CAD may continue to give back the advance carried over from the previous month as the Bank of Canada (BoC) softens its dovish outlook for monetary policy, but the fresh data prints coming out of the region may dampen the appeal of the loonie as the central bank warns ‘the output gap will close somewhat later than estimated in April, towards the end of 2017.’

This weekend saw a stark change-of-pace in price action trends around Japanese markets. After Shinzo Abe’s coalition won a super-majority in the upper-hours of Japanese parliament, resistance has been lessened for the push for constitutional reforms and additional economic stimulus.

The Australian Dollar is at the mercy of risk appetite trends once again, with post-Brexit spillover fears and geopolitical jitters threatening the sentiment-linked currency.

Gold prices are sharply lower this week with the precious metal down more than 2.8% ahead of the New York close on Friday. The losses snap a six-week winning streak that stretched into two-year highs and come amid continued strength in global equity markets with both the Dow & S&P hitting fresh record highs.