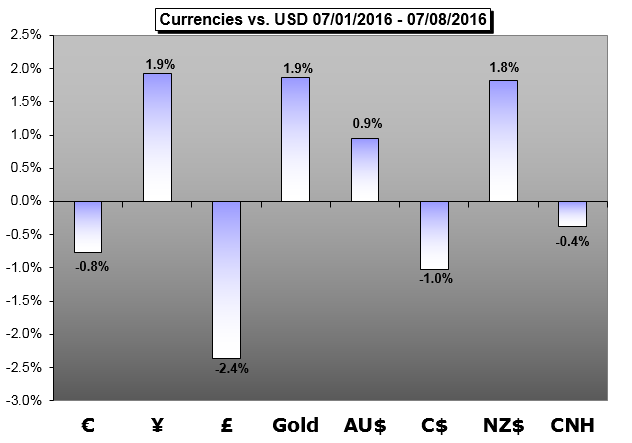 This past week was concentrated on a singular event – NFPs which materially bested expectations. Ahead, we will tap into key global themes from Brexit with the BoE decision to China GDP and Eurozone stability.

It would seem that the Dollar had strong fundamental fuel to revive its climb this past week, but the currency made little effort to revive its post-Brexit rally.

It seems like it’s just a matter of time until the Italian banking sector is bailed out – which won’t do anything but stir more populism in Europe.

The British Pound continues to get smashed in the post-Brexit environment, with this week seeing yet another +30-year low print as price action drove below the psychological 1.3000 level against the US Dollar.

Key developments coming out of the U.S. economy may largely influence the USD/JPY exchange rate over the week ahead as the economic docket remains fairly light for Japan.

The Australian Dollar is likely to fall in with risk sentiment trends as markets weigh up the threat of a global economic slowdown on the heels of the UK “Brexit” referendum.

Chinese Yuan Forecast - To Track the Dollar, or to Track the Basket; That is the Question Around the Yuan

Gold prices advanced for a sixth consecutive week with the precious metal up more than 0.9% ahead of the New York close on Friday.