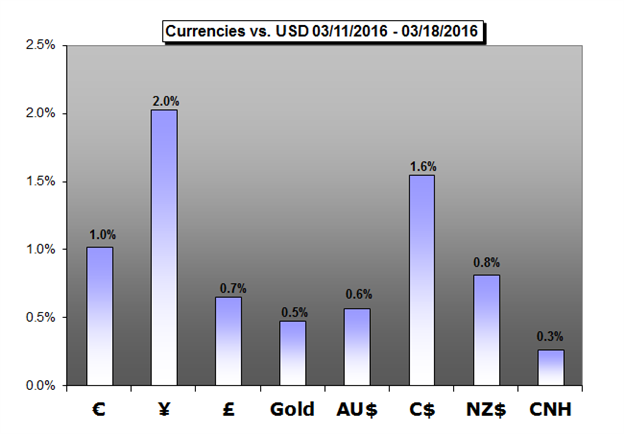 The Dollar's tumble these past three weeks was given fundamental backing by the Fed's downgrade of its interest rate forecasts. Does this mark a definitive turn in trend for the majors and risk trends?

The Dollar has taken a nasty spill, but how do we reconcile the recent decline against years of rally and the proximity of a near-decade high?

Euro Forecast - Did Draghi Finally Find a Recipe For Strength?

The most recent European Central Bank meeting was a pretty big deal.

The near-term rebound in GBP/USD may gather pace in the week ahead should the key developments coming out of the U.K. economy put increased pressure on the Bank of England (BoE) to normalize monetary policy sooner rather than later.

After two weeks of significant central bank action - withstanding the Bank of Japan, of course – risk trends may settle, especially with the Easter holiday around the corner. All of this portends to a muted, yet dangerous, trading environment for the Japanese Yen.

The Australian Dollar may correct lower amid corrective capital flows and pre-holiday liquidity drain after hitting a nine-month high against its US counterpart.

One of the biggest drivers of Canadian Dollar strength over the past two months is due to arrive this week: the long-awaited federal budget reveal that is expected to bring forth a whole new wave of fiscal stimulus.

The New Zealand Dollar hit 2016 highs this week on the back of a dovish Federal Reserve announcement where the number of expected interest rate hikes was lowered from four to two.

The Chinese Yuan pulled higher both on onshore (CNY) and offshore markets (CNH) against the greenback following the more dovish-than-expected comments from the Federal Reserve this week.

Gold prices traded higher this week, with the precious metal advancing 0.58% to trade at 1256 ahead of the New York close on Friday.