The fundamental focus will shift temporarily from the Dollar over the coming week - just as trend pressure comes into view - with China's NPC meeting and the ECB rate decision drawing traders' anxiety.

The Dollar tumbled this past week as a tempered view for Fed rate hikes rendered the currency incapable of taking advantage of the improved sentiment across global markets.

Another swell in volatility is a near-certainty across the EUR-crosses with the European Central Bank’s meeting this Thursday. Without a surprise, the ECB seems destined to send the Euro on an early-December 2015 replay.

After posting the first five-consecutive days of advances since June, GBP/USD stands at risk facing near-term headwinds should Bank of England (BoE) officials endorse a wait-and-see approach ahead of their next interest rate decision on March 17.

A great week for the US S&P 500, Japanese Nikkei 225, and other global financial bellwethers pushed the inversely-correlated Japanese Yen lower against almost all G10 counterparts.

The Australian Dollar will look to the impact of the ECB rate decision on risk appetite trends and news-flow from China’s NPC for fuel to extend the largest rally in four years.

The New Zealand Dollar has out-performed every currency aside from its rival Australian Dollar over the last week.

The offshore Yuan rate (CNH) climbed over 260 pips against the US Dollar on Thursday and extended gains going into the Friday close.

Gold Forecast – All That Glitters is Gold

This title is a line taken from Shakespeare. He actually said ‘all that glisters is not gold,’ but ‘glisters’ was the word for ‘glitters’ in the 17th century, so the saying has held while the English language has evolved. 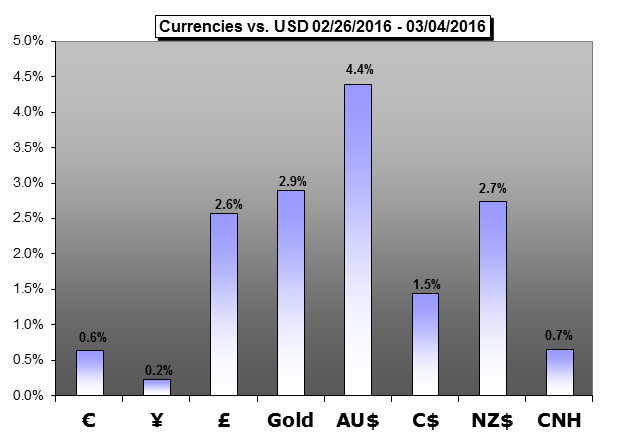