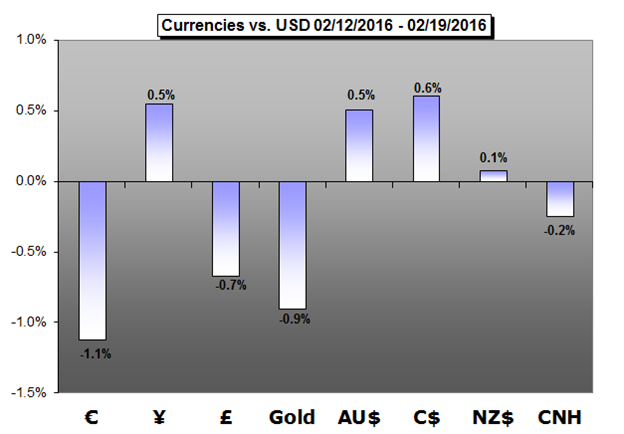 US Dollar Forecast – Dollar: What Will It Take to Recharge Momentum in the Coming Week?

A retreat through Friday left the USDollar with limited gains on the week. Nevertheless, the Greenback will head into the new trading week with tangible gains against the Euro and Pound – two of its most liquid counterparts.

Markets will have a better idea of recent Euro-Zone growth developments after this coming week, but the only clarity the Euro may enjoy is that more volatile, sideways trading is ahead.

Dominating the headlines for the foreseeable future in the UK will be the prospect of a ‘Brexit,’ or a British exit from the European Union.

The Japanese Yen finished the week marginally higher despite a clear disappointment in economic growth figures, and two key themes will likely determine whether the JPY resumes its impressive year-to-date uptrend.

The long-term outlook for USD/CAD remains tilted to the upside amid the deviating paths for monetary policy, but signs of a slowing recovery in the world’s largest economy may spur a further correction in the exchange rate especially as the Federal Reserve remains in no rush to implement higher borrowing-costs.

Australian Dollar Forecast – Aussie Dollar at the Mercy of Risk Trends on US, Eurozone Data

The Australian Dollar is set to look past a lackluster domestic data docket to trade with risk sentiment trends on the back of high-profile US and Eurozone event risk.

The New Zealand Dollar remains unable to sustain a push higher as the macroeconomic data continues to prevent a risk-on rally, which NZD benefits from to be sustained.

In the past week, the onshore Yuan rate (CNY) had its biggest weekly gain against theUS dollarsince March 23, 2015.

Gold prices snapped a 4-week winning streak this week with the precious metal off 0.84% to trade at 1227 ahead of the New York close on Friday.