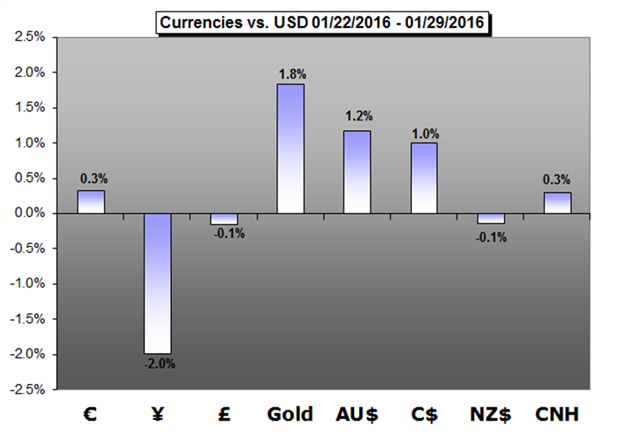 The BoJ refreshed the global central bank discussion this past week after announcing negative rates. And, risk-oriented markets gained as they have in years past. Is this a return to familiar trends or a false dawn?

US Dollar Forecast - Dollar Hits a 12-Year High, But Can NFPs and Sentiment Maintain Lift?

The USDollar closed at a fresh 12-year high this past week. Yet, the occasion of breaching such exceptional heights has repeatedly disappointed over the past year.

January 2016 presented a number of surprises to market participants, including threats of looser monetary policy from the European Central Bank and the People’s Bank of China, while the Bank of Japan took the extraordinary step of introducing negative rates. Throw away all your preconceived notions going forward.

The Bank of England (BoE) interest rate decision is likely to heavily impact the British Pound next week with the central bank schedule to release its updated forecasts, and the near-term rebound in GBP/USD may continue to unravel should the Monetary Policy Committee (MPC) show a greater willingness to further delay the normalization cycle.

Confidence is a pretty important thing in a financial system. After all, in a fiat-based monetary system, all that we really have is faith.

The Australian Dollar may find volatility in US new-flow’s impact on risk trends as the RBA maintains the status quo and Chinese economic data passes with little fanfare.

Steven Poloz’s refrain of a Bank of Canada rate cut that had become the preferred bet as the Loonie dropped brought a magnificent reversal for the CAD.

Overall, the Chinese yuan in the next week should remain relatively stable. However, the hidden pressure from BOJ rate cuts may be released over a longer period of time.

Gold prices are higher this week with the precious metal rallying nearly 1.8% to trade at 1117 ahead of the New York close on Friday.