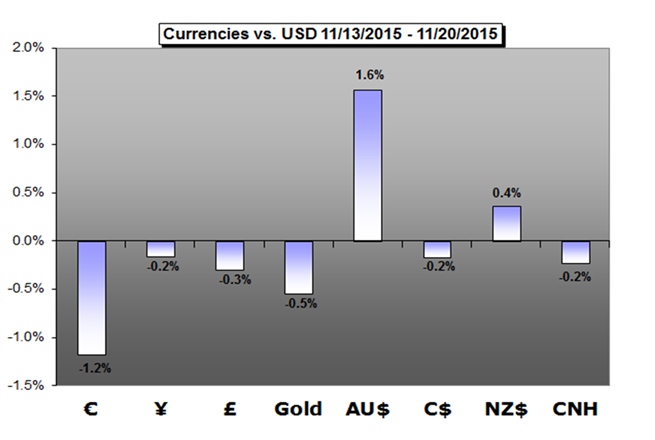 The US Thanksgiving holiday is ahead, but traders shouldn't be lax about the risks that still lurk through the system. Key fundamental risks remain and an ill-timed swoon in liquidity could prove a critical problem.

The US Dollar this past week thwarted what could have been a nasty reversal that changed the balance of sentiment.

Markets are looking right through to the end of the first week of December, and for good reason: the ECB has its last policy meeting of 2015; Federal Reserve Chair Janet Yellen gives testimony in front of Congress; and the November US Nonfarm Payrolls report will be released. It’s going to be a very important few days.

GBP/USD extended the rebound from earlier this month as the Federal Open Market Committee (FOMC) Minutes warned of a potential three-way split within the central bank, but the pound-dollar may struggle to hold its ground in the week ahead should the Bank of England (BoE) show a greater willingness to further delay its normalization cycle.

In an ideal economy, which doesn’t exist anywhere, weakness in one sector would be followed or balanced by strength in another sector.

The outlook for the Australian Dollar is clouded in the week ahead as the currency continues to recover despite an adverse shift in monetary policy expectations.

In previous pieces on the New Zealand Dollar, we’ve discussed the correlation between Milk prices and the spot rate on the Kiwi-Dollar.

Gold prices continued to fall for the fifth consecutive week with the precious metal down 0.6% to trade at 1076 ahead of the New York close on Friday.