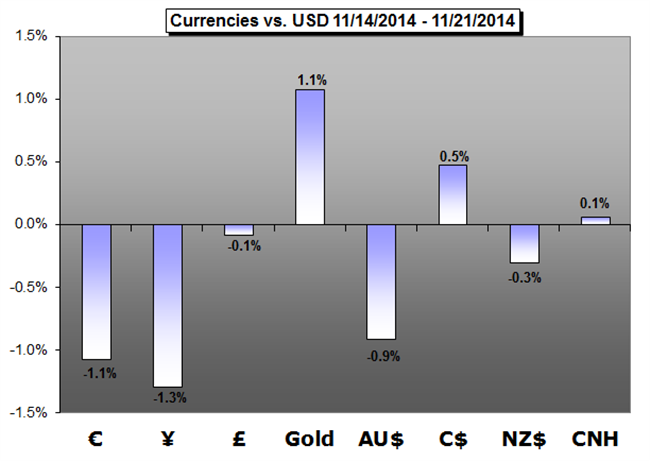 Just as the global capital markets were preparing for the seasonal downshift into Thanksgiving week, multiple central banks sent a shockwave of volatility through the markets. Be wary of FX volatility this week.

US Dollar Forecast– Dollar May Not Have a Quiet Thanksgiving...

From a fundamental perspective, the Dollar’s interest rate backdrop seems to be mired in debate over the timing of the inevitable first hike.

The recent slip in Euro-Zone economic data momentum takes away what was one of the only weapons hawks brought to the ECB: that the recent stimulus measures were doing enough in the short-term to justify the ECB holding out on new easing.

The Japanese Yen may rise as markets look past the onset of recession and looming general election risk to focus on the trajectory of sentiment trends.

GBP/USD may face a more meaningful rebound in the week ahead as the Bank of England (BoE) highlights the risk of overshooting the 2% target for inflation, while the Federal Reserve remains reluctant to move away from its zero-interest rate policy (ZIRP).

The Aussie is in for another suspenseful week near its 2014 low as elevated volatility expectations threaten to keep pressure on the high-yielding currency.

The Euro-Zone financial crisis and its resulting toll on monetary policy weren’t limited to the European Central Bank: the Swiss National Bank has been forced to act in tandem with the ECB since levying the Sf1.2000 floor on September 6, 2011.

Gold prices are higher for a third consecutive week with the yellow metal rallying 0.8% to trade at $1197 ahead of the New York close on Friday.