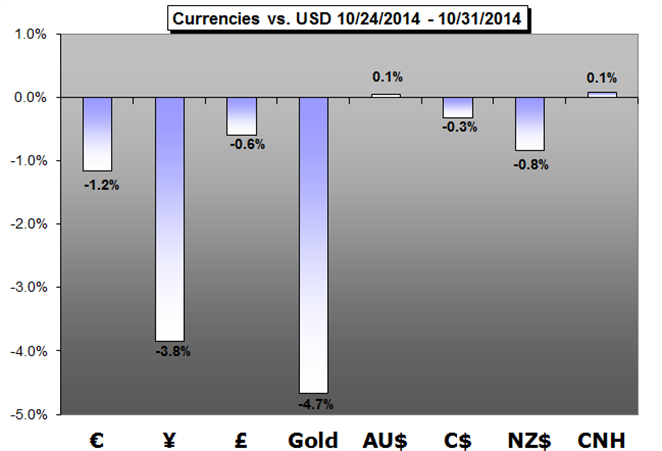 Currency markets are in for another week of breakneck volatility as a slew of key data releases and three high-profile monetary policy announcements cross the wires.

US Dollar looks poised to continue to advance for a third week as upbeat payrolls data fuels speculation that a Fed interest rate hike will arrive sooner rather than later.

Euro Forecaset - QE This Week from ECB, but Prospect of Easing Haunts Euro

The prospect of further stimulus, in the burgeoning era of BoJ- and ECB-led stimulus, now that the Fed is seemingly walking away from the game, might be enough to spook market participants from seriously engaging the Euro from the long side.

The British pound finished the week notably lower versus the resurgent US Dollar, but a busy week of economic event risk ahead suggests the GBP/USD may see big moves and could very well stage a reversal.

The Aussie is bracing for a medley of economic releases that may catalyze intraday swings, yet scope for follow-through may be limited amid steadfast RBA bets.

Gold prices plummeted this week with the precious metal off by more than 5.2% to trade at $1166 ahead of the New York close on Friday.