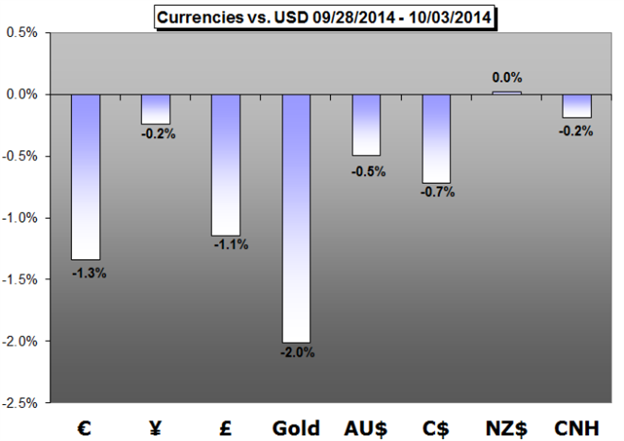 US Dollar Forecast - Dollar’s Rally Has Grown Even More Extreme

The Dollar’s rally grows more remarkable with each week…at the same time that it grows more difficult to believe.There is no denying its bullish bearing.

In Wake of ECB and NFPs, EUR/USD More Data Driven than Before

Why no Euro rebound post-ECB? Traders don’t necessarily believe in the current pipeline of stimulus, so economic weakness and falling inflation expectations are likely to persist; and pressure on the ECB will build until they actually move forward with a Fed-styled QE in the coming months.

The Japanese Yen fell to fresh post-financial crisis lows versus the surging US Dollar, but a clear slowdown the USDJPY rally warns that it’s near an end.

The medium-term outlook for the NZD/USD remains bearish as the Reserve Bank of New Zealand (RBNZ) sticks to a neutral policy stance and retains the verbal intervention on the New Zealand dollar, but the pair may face a larger correction in the days ahead should the fresh back of central bank rhetoric coming out of the Federal Reserve drag on interest rate expectations.

The Australian Dollar faces an uninspiring fundamental backdrop over the coming week, which leaves recovery hopes to hang on weakness for its US namesake.

Gold prices are markedly lower this week with the precious metal off by more than 2.1% to trade at $1191 ahead of the New York close on Friday.

Written by the DailyFX Research Team. To sign up for a weekly e-mail with our currency outlooks, go to our page for forex news delivered to your inbox.