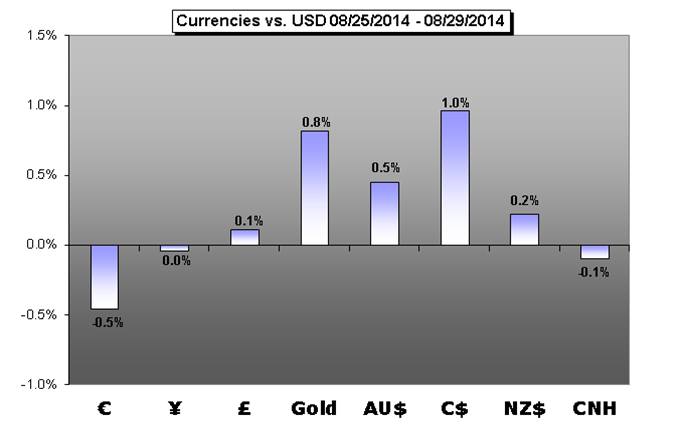 Dollar Traders Look Ahead to a Return of Liquidity and NFPs

Relative performance versus weakened cross currencies and a stable economic footing are unlikely to drive EURUSD below 1.3000 or GBPUSD through 1.6500. The next leg will be decided between Fed rate forecasts and the level of volatility in the markets. As it happens, we happen to have the ingredients to ignite speculation on both fronts.

The Euro was the worst performing major currency last week, extending its losing streak against the US Dollar to seven consecutive weeks. EURUSD’s -0.84% drop last week sunk it to $1.3131, its lowest exchange rate since September 6, 2013.

The British Pound may face additional headwinds ahead of the policy meeting as the economic docket for the U.K. is expected to show a slowdown in private-sector lending, and a series of dismal data prints may keep the central bank on the sidelines as Governor Mark Carney persistently highlights the ongoing slack in the real economy.

Japanese Yen Looks Ripe for a Reversal on Huge Week Ahead

The Japanese Yen traded to fresh lows versus the resurgent US Dollar on a relatively quiet week of trading. Yet the coming days promise significantly more volatility and may ultimately decide whether the USDJPY continues higher or remains within its year-to-date range.

AUD Braces For Volatility On Torrent Of Top-Tier Events

A drought of domestic data is set to give rise to a torrent of top-tier economic events over the coming week. These offer the potential to catalyse significant intraday volatility for the Aussie. Yet an escape from its multi-month range against the greenback may prove difficult without the requisite shift in RBA rhetoric.

While the latest price action demonstrates that M&A considerations are to be respected, their ability to fuel continued Canadian Dollar gains without support from baseline fundamentals seems inherently limited. With that in mind, the outcome of next week’s Bank of Canada (BOC) monetary policy announcement stands out as critical, with the outcome likely to prove formative for the Loonie’s direction in the near term.

Gold prices are slightly firmer this week with the precious metal higher by 0.48% to trade at $1287 ahead of the New York close on Friday. As we head into the open of September trade, the focus shifts back onto the economic data front as bullion holds just above the technically significant 200-day moving average.